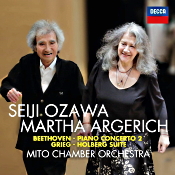 
Beethoven wrote his Piano Concerto No. 2 in B-flat major between 1787 and 1789, and then revised it before its publication in 1801. Beethoven was the soloist at the concerto’s première in 1895, his debut performance, and he hoped both the concerto and the performance would help him make a name for himself. Beethoven would later say that he didn’t consider the First or Second Piano Concertos among his best work, and they do owe a lot to the earlier classical styles of Haydn and Mozart. Still, they have a buoyant charm that audiences find hard to resist, especially the Second Concerto’s playful finale.


I’m happy to say that throughout this album neither Ms. Argerich nor Maestro Ozawa seems to have lost any of their youthful spark. Even though tempos are unhurried, they are never sluggish. Far from it, at moderate speeds their playing is vibrant and joyful. The central Adagio is appropriately serene, contemplative, and hushed, with both the soloist and the orchestra playing most sensitively. In the lighthearted final movement, Ms. Argerich could be twenty again. She hasn’t lost a beat. None of this slowing down with maturity business for her. It’s a delightfully lively rendition of the music.


The second work on the program is the brief Allegro movement from Mozart’s Divertimento in D major (1772). Mozart wrote it for string quartet but later transcribed it for string orchestra, which we have here. A booklet note tells us that the recording was a surprise musical gift to Ms. Argerich “when she was bestowed the Order of the Rising Sun by the Emperor of Japan at a concert in Beppu in May 2017.” Ozawa affords it a lithe, comfortable, and affecting reading.


The program concludes with the Holberg Suite by Danish-Norwegian composer and pianist Edvard Grieg; it’s music he wrote in 1884 to commemorate the 200th anniversary of the birth of the playwright Ludvig Holberg. Grieg’s official title for the piece is actually the rather cumbersome From Holberg’s Time: Suite in the Olden Style, which isn’t exactly catchy. It’s a series of movements that Grieg originally wrote for piano but later adapted for string orchestra, which Ozawa and company play. In the work’s five movements, an introduction and four dances, Grieg tried his best to represent the music of Holberg’s era some 150 years earlier. Even if the result is not exactly a Peer Gynt suite, it has its moments, reminding one of a kind of a nineteenth-century Romanticized take on early eighteenth-century music. Ozawa and his players approach it with dignity and refinement, giving the final movement a jolly good turn.


Producer Dominic Fyfe and engineer Jonathan Stokes recorded the music at Art Tower Mito, Mito City Ibaraki, Japan in May 2017 and May 2019. The sound in the Beethoven is classic Decca: clear and well defined, a touch metallic, dynamic, a little close, and somewhat flat. For a comparison, I put on Stephan Kovacivich’s 1974 recording for Philips and found it warmer, better imaged, and more dimensional. Nevertheless, anyone who has listened to and enjoyed Decca recordings over the years will find this one pretty much in the ballpark. The two orchestral pieces--Mozart and Grieg--sounded more natural to me, rounder and sweeter, with only a few instances of hardness or brightness.