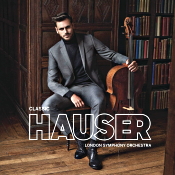 He’s young; he’s handsome; he’s talented. He is (or was) one half of the crossover phenomenon called the 2CELLOS. Now he’s also a singles act, a gifted cellist that Sony appears to be marketing as another Mario Lanza. He is so big, in fact, that Stjepan Hauser has now outgrown his name and is just HAUSER. Yet so big that his name can only be accommodated by capital letters (like 2CELLOS), making him, I suppose, even bigger than Liberace or Cher. You can see where I’m going with this.


HAUSER’s latest release, “Classic HAUSER,” is more like a pop concert than an actual classical album. Yes, it says “Classic” in the title, but Sony is clearly going after the youth market here, no doubt mainly young women who may swoon over both the Romanticism of the music and the good looks of the artist. The disc comprises sixteen selections, the longest being around eight minutes and the majority being closer to the pop standard of four minutes or less. A booklet note tells us the final item, Barber’s Adagio for Strings, is 0:00 minutes. You can’t get much shorter than that. (Actually, it’s 7:57.)


I’ve mentioned this before, but I can’t help thinking of the first “classical” album I ever bought: a boxed LP set of the 101 Strings playing parts of famous classical pieces. But they were complete parts, like entire movements of longer works. Here, HAUSER plays brief portions of popular classical music, most of them written for other instruments and transcribed for cello.


He plays the pieces beautifully, of course, and the London Symphony Orchestra backs him with their usual grace and accomplishment. But the music is still in bits and pieces, meant to satisfy fans of the soloist who are not necessarily fans of classical music. So, I guess what I’m saying is to be aware of what you’re getting. You may be satisfied for a moment or two, but you may also long for more.


HAUSER’s sound is lush and sonorous, depending on the selection. his tone golden, and his flexibility in handling all kinds of musical moments nigh perfect. I just wish he had more to work with than the golden oldies he presents here. While it’s all quite lovely, it’s all out of context, too, and all rather brief. What can we expect next? The Beatles Songbook, perhaps? And he would doubtless do it justice.


Producer Nick Patrick and engineers Neil Hutchinson and Simon Rhodes recorded the music at Henry Wood Hall, London in June 2019. The sound is befitting the nature of a pop album: It’s fairly close up, vivid in its detail, and somewhat flat in its perspective, with the soloist always well front and center. It’s also very loud, perhaps in anticipation of its being played in an automobile.