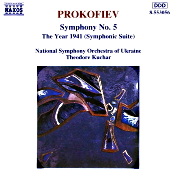 Here is another of those Naxos releases that is worth more than every penny of its modest price. In fact, this disc might serve as an example to other record companies for its recommendable performance, good sound, and generous playing time. Of course, I should remind readers that Naxos released the disc some twenty-five years ago, when costs were lowers. But it remains a good example of the quality work the record company produces for still reasonable prices.

Next to Prokofiev's First Symphony, the Fifth probably ranks as the composer's second most-popular symphony, so there is already some healthy competition in the marketplace. Yet this medium-priced entry holds its own; it never flags and seldom settles into the routine. Conductor Theodore Kuchar keeps Prokofiev's imposing vision moving along with a finely tuned strength and insight, but never overwhelmingly so, and the National Symphony of Ukraine play with a polished professionalism.

Maestro Kuchar's direction might most favorably be compared to Previn's (Philips) in its combination of smoothness, stateliness, cheerfulness, and tranquility. Not quite so glamorous as Karajan's (DG), perhaps, but atmospheric and responsive. What's more, Naxos have coupled it with Prokofiev's symphonic suite The Year 1941, which Kuchar also brings off well.

Producers Alexander Hornastai and George Orobynsky and engineer Leonid Blychynsky recorded the music at the Concert Hall of Ukrainian Radio, Kiev in February 1995. As an added element of value, the sound is more than acceptable. There is not the surpassing transparency one finds in some audiophile discs, but the whole affair does transport us a step closer to the concert hall than most other recordings do. The engineers miked the orchestra at a moderate distance, providing cohesion, ambient bloom, and a fairly good degree of depth, while seldom highlighting or sectioning off portions of the ensemble. The frequency balance is natural and the range extended.

As with so many Naxos recordings, the sound is tailored for its reproduction of a real concert hall. It's like what the late J. Gordon Holt said in his Stereophile magazine over fifty years ago: If you never listen to music live and unamplified, how can you make a judgment about its hi-fi reproduction? So, what is one's basis for comparison, anyway, if not live, unamplified music? You'll say I'm digressing. Nevertheless, I want to point out that this Naxos recording makes a fine basis for comparison, for judging the quality of a hi-fi system. Sit in a concert hall, ten to twenty rows back, listen, and then come home and compare. Kuchar's Prokofiev comes close, at least on my system.