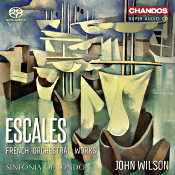 The last few times I reviewed albums from conductor John Wilson, he was conducting the BBC Philharmonic in music of Aaron Copland; and the Royal Liverpool Philharmonic in the music of John Ireland; and his own John Wilson Orchestra in the music of Cole Porter and Rodgers and Hammerstein. Now he's back, this time at the helm of the reconstituted Sinfonia of London, an on-and-off-and-on-again session ensemble originally formed in 1955. Whatever, Escales is an ebullient romp from Maestro Wilson and his players through several well-known (and some less well-known) French light pieces.

The program begins with the ever-popular Espana by Emmanuel Chabrier (1841-1894), the composer's French take on all things Spanish. Wilson gives us a sparkling presentation of Chabrier's colorful music, yet with few surprises. It's a well-crafted performance without offering much we haven't heard before.

The next two items are not quite as famous: Trois Danses by Maurice Durufle (1902-1986) and Le Rouet d'Omphale by Camille Saint-Saens (1835-1921). The Durufle piece comes through quite well, perhaps helped by the fact that there aren't too many previous recordings with which to compare it. Wilson handles the dynamic contrasts and tonal shadings smoothly, the second, slow dance standing out. "The Spinning Wheel of Omphale" is a piece Saint-Saens based on a Greek legend, and Wilson does a good job helping it come alive for us in highly descriptive fashion.

Following them is the perennial hit Prelude a L'apres-midi d'un faune by Claude Debussy (1862-1918). "The Prelude to an Afternoon of the Fawn" is probably as renowned as the composer's La Mer. It is the most atmospheric work on the disc, and the listener probably already has multiple versions of it. Still, its sinuous moods can be captivating, even if Wilson's interpretation brings little that's new to the table.

Then there's the album's title music, Escales ("Ports of Call"), by Jacques Ibert (1890-1962). Each of its three sections evokes the sounds and flavor of a different location: Sicily, Tunisia, and Valencia. These were my favorite pieces, with Wilson recreating the sensations of the three locales vividly

The program wraps up with two prominent numbers, the "Meditation" from Thais by Jules Massenet (1842-1912) and Rapsodie espagnole by Maurice Ravel (1875-1937). The beauty of the "Meditation" never grows old, and while Wilson's rendering may not be as delicately wrought as some others, it effectively communicates the composer's expression of serenity and sensuality. The Ravel piece seems appropriate as it bookends the agenda with another French composer's idea of Spain. Wilson gives it fair due.

In sum, although John Wilson's take on this celebrated music breaks no new ground, everything is enthusiastically presented and meticulously performed. There is also enough variety in the selections to please most listeners and perhaps even to uncover a hidden gem or two the listener had not heard before. Fair enough.

Producer Brian Pidgeon and engineer Ralph Couzens recorded the music at the Church of St. Augustine, Kilburn, London in January and September, 2019. They recorded it for playback via hybrid SACD 2-channel and multichannel or regular CD 2-channel. As usual, I listened in SACD 2-channel via a Sony SACD player.

A mild hall resonance tells us where we are, and it's not unpleasant. Dynamics are good, with adequate impact for the big numbers like the Chabrier. Orchestral depth, too, is sufficient, though not entirely audiophile. While ultimate transparency is merely OK, the sound does project a reasonably lifelike presence. In other words, it's good, modern digital sound with a fairly well balanced frequency response, the kind of sound we're used to getting from Chandos.