Somewhere in the mid 1990's, Chesky Records decided to remaster several of their better-sounding classical albums on gold discs, the gold plating presumably offering a cleaner reading of digital pits. Be that what it may, the results were impressive, with first-rate performances in first-rate sound. Unfortunately, a quick check of Chesky's Web site indicates they no longer offer the product. Fortunately, both of the discs reviewed here are still available on-line, albeit at fairly high prices. 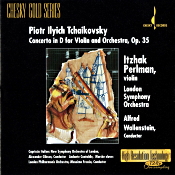 Anyway, Sir John Barbirolli's Sibelius Second Symphony, from 1962, has been a consensus choice of critics almost since its release, but more particularly since its CD debut on Chesky Records over a decade ago. The interpretation is beyond reproach, an ideal blend of Nordic chill and Romantic, Italianate warmth. Now, the sound has caught up with the performance as Chesky have completely remastered it in 128x over-sampling and stamped it out in gold. The result is a stunning issue, completely belying its thirty-odd years. Above all, the sound on Chesky's gold disc is smoother, more refined, slightly better delineated, and quieter than on their regular silver disc. In short, it is more listenable and takes its place alongside the better audiophile discs available.

Perlman's 1967 version of the Tchaikovsky Violin Concerto is less well known. To my knowledge, only I have recommended it without reservation as one of the best interpretations of this much-loved favorite, and I have included it repeatedly in my "Basic Classical Collection on Compact Disc." To my mind, it is a better performance than any of Perlman's subsequent recordings, sweeter yet just as emotionally charged. Here, as with the Sibelius, gold remastering lends the sound an added polish, greater transparency, and smoother tone. The differences are not quite so noticeable as with the Sibelius, but they are improvements that anyone with a good hi-fi system will appreciate.

In addition to the amended sonics, Chesky have also clarified their box labeling to the point where one no longer needs an interpreter to decipher who is playing what with which orchestra and conductor; and on the Tchaikovsky album, the works themselves are better laid out, with the Violin Concerto sensibly placed first.

I know that some people will question the value of buying expensive gold discs for a limited amount of music, especially for the Sibelius, which lasts only forty-four minutes. For them, excellent alternatives abound. For instance, Sir Colin Davis's Sibelius Second is coupled with No. 6 on an RCA digital release, and Jascha Heifetz's Tchaikovsky comes with either the Brahms or Mendelssohn violin concertos on RCA reissues. But if you're willing to pay for the very best, you won't be disappointed seeking out the Chesky gold series.