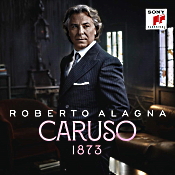 French-Italian tenor Roberto Alagna (b. 1963) has been one of the leading lights in opera for the past forty years, so it's interesting to hear him say that although his grandparents had met Enrico Caruso in New York, he first became interested in his fellow tenor when as a child he saw the biographical movie The Great Caruso (1951) starring Mario Lanza. Apparently, he's been a fan of Caruso (and other historical tenors) ever since then, and he decided to do this album as a tribute to the legendary star.

Alagna also says that he didn't want to try to imitate Caruso on the recording, but rather to suggest Caruso's style, especially the way the iconic tenor combined the best of the bel canto tradition with that of the newer verismo trends. Alagna explains that he tried "to adopt as accurately as possible Caruoso's style of singing, of emitting sound, his individual manner of phrasing--an exercise in subtlety." His aim was to celebrate Caruso, not imitate him, while still hanging on to his own identity. Alagna appears to do just that in a program that doesn't really include Caruso's greatest hits, most of which Alagna has already recorded. Instead, Alagna has chosen Caruso favorites that show off the versatility of his idol.

The first item, "Caruso," a tribute written to the singer by Lucio Dalla and modified by Alagna and conductor Yvan Cassar, is the only song Caruso himself would not have sung. But it opens things well enough in setting the tone for the album. From there it's a roller-coaster ride of differing tunes--some favorites of Caruso, some favorites of Alagna, some from opera, some from pop culture--all taken pretty much as Caruso did them up. Although Alagna recorded the bulk of the album using current recording technology, he concludes things with a bonus number recorded with the equipment Caruso himself might have used. It's a charming gimmick.

As with most collections, the listener will no doubt like some of the material and not like others. In this regard, Alagna tells us that Caruso would often record a song at a faster-than-normal tempo just to accommodate it on discs of the time that would not hold more than five minutes per side. Whatever, there is no doubt about Alagna's throwing himself into each and every song with gusto.

Personal favorites? The Gomes and Verdi numbers Alagna does with soprano Aleksandra Kurzak and bass Rafal Siwek. They sing well together and complement one another's voices, especially in the Verdi.

Now, I'm no expert in or connoisseur of opera, Caruso, or Alagna, so I can't tell you if Alagna captures the older singer's style or not, or whether it's even great singing. What I can say is that Alagna has a clear, clean, rich tenor voice, and he sings with heart, even if he's channeling Caruso. His arias are moving and well phrased. If they're Caruso's phrasing, all the better; if not, they mainly still work.

Producer, arranger, and conductor Yvan Cassar recorded the music at La maison de l"Orchestre national d'Ille-de-France and at Ondif Studio, Paris in June-August 2019. The sound is kind of in the pop category, with the soloist very close up and the orchestral accompaniment clear and wide behind him. The voice does have a nice, round, realistic quality to it, although it tends to get a trifle strident at higher frequencies in louder passages. There is also a wide dynamic range involved, so things do get very loud very quickly. Still, the sound emphasizes the voice, and that's likely all Alagna's fans will care about. So it works.

Email ThisBlogThis!Share to TwitterShare to FacebookShare to Pinterest
Labels: Alagna.Roberto