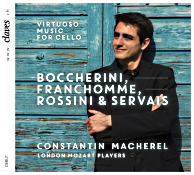 Here are a few things I didn't know: The cello was "derived from the viole da braccio family rather than that of the viols." Moreover, the young Swiss cellist Constantin Macherel featured on this disc is a laureate of numerous competitions and has performed recitals all over the world. He plays an old English cello by Joseph Hill, ca. 1765. Here, he is accompanied by the London Mozart Players, which, again news to me, is the UK's longest established chamber orchestra. They play under the direction of cellist Sebastian Comberti, who has appeared many times as a soloist with the London Mozart Players, the Orchestra of the Age of Enlightenment, and the Hanover Band.

The disc's program consists of five selections from the Baroque, Classical, and early Romantic periods. The opening number is the Variations sur deux themes (russe and ecossais) (1835) by the French cellist and composer Auguste-Joseph Franchomme (1808-1884). It's a charming piece played with elegance and refinement by Macherel. One certainly notices the melodies of Russia and Scotland throughout, but there are also hints of America's Stephen Foster as well. Whatever, it's nostalgic and reflective and poetically presented.

Next comes Souvenir de Spa, Fantaisie (1844) by Franchomme's good friend Adrien Francois Servais (1807-1866), who was one of the most influential cellists of the nineteenth century. As in the Franchomme piece, we get music of extended refinement, this time the composer's impressions of Spa, the Belgian resort town famous for its mineral springs. It can be a bit more energetic than the Franchomme and not quite as sentimental, but it is equally as enchanting, with Macherel showing off his virtuosity.

After that is the longest and earliest piece on the agenda, the three-movement Cello Concerto No. 6 in D Major (1770) by the Italian composer and cellist Ridolfo Luigi Boccherini (1743-1805). It's a typically delightful piece from Boccherini, and the string accompaniment from the London Mozart Players well complements Macherel's graceful playing.

In the penultimate spot we find Une Larme, Theme et variations (1858) by Italian composer Gioacchino Rossini (1792-1868). These variations on "A Tear" can range rather pointedly from lively to playful to pensive. They are fun, and Macherel makes the most of the change-ups.

The album concludes with Chant d'adieux, Fantaise (1836), by the same man who opened the program, Auguste-Joseph Franchomme. He based the music on a funereal melody, so don't expect a lighthearted close to the agenda. But do expect the same degree of stylishly dignified attention by everyone involved.

Producer Rachel Smith and engineer Ben Connellan recorded the music at St. John the Evangelist, Upper Norwood, London in June 2018. The sound, while a tad close-up in the cello work, is otherwise excellent. The clarity is admirable, the detail, the definition. When the stage opens to the full chamber orchestra, it is well spread out, with lifelike distances between the instruments and a reasonably wide stereo spread. It's among the nicest, cleanest, most realistic things I've heard this year.