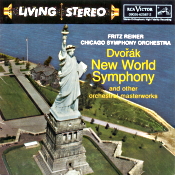 By now, the names Fritz Reiner and "Living Stereo" should be synonymous with highest recommendation. It's a no-brainer, a win-win situation. Between the years 1954 and 1962 Reiner made a remarkable number of stereo recordings for RCA. They were remarkable for two reasons:  first, because almost all of them were immediately recognized as superb performances and have remained on practically everyone's list of recommended recordings for the last forty years; second, because they were recorded in the pioneering days of stereo before sound engineers had learned much about screwing things up. 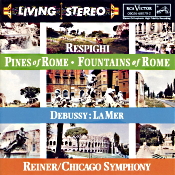 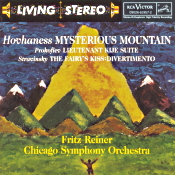 Back then, a lot of recording engineers appeared to be interested in minimal miking, a wide stereo spread, good front-to-back dimensional information, as well as wide dynamic and frequency ranges and reasonably unaffected tonal balance. Things like stereo multi-miking, spotlighting, highlighting, partitioning, reverb, compression, dynamic and frequency limiting, and artificial brightness were just starting to come into their own. For the most part, the conductor was still in charge of the sound of his orchestra. Lovingly remastered by RCA, the "Living Stereo" CD series, which RCA introduced in the mid 1990's, especially the ones with Reiner, show us just how good those simple, early techniques were, techniques later adopted by many prominent audiophile labels in their own recordings.

Anyway, of the three early discs in RCA's "Living Stereo" CD line, Reiner's Dvorak is the only recording I had not heard in many years. This Dvorak Ninth Symphony from 1957 still does not displace my favored Kertesz (Decca) or Horenstein (Unicorn) recordings, but it packs much mature drama and conviction into a powerful and enjoyable performance.

The Reiner recording of Hovhaness's Mysterious Mountain, also from 1957, has been a classic for four decades and helped put Hovhaness on the musical map. It may not hold up as well sonically as, say, Gerard Schwarz's Seattle Symphony disc on Delos, but it is clearly among the most profoundly spiritual readings imaginable. Its coupling with Stravinsky's Fairy's Kiss and a delightful rendition of Prokofiev's Lt. Kije makes this an attractive package. Each of these recordings had appeared previously on CD from RCA. Perhaps in the "Living Stereo" series they lose a little something in overall brilliance, but they have never sounded quieter, smoother, or more natural.

The third disc I'll mention is an absolute must-buy. I think I have owned Reiner's Respighi tone poems, the Pines of Rome and Fountains of Rome, in one form or another for as long they have been around (RCA recorded them in 1959, and I bought the LP in the early 60's). Yes, the newer Muti and Dutoit recordings sound a little better in some ways, but no one has yet captured the color and splash of these works as well as Reiner. Coupled with yet another classic among classics, Debussy's La Mer, itself a perennial top-of-the-pile choice, this disc gets my highest  recommendation.

Incidentally, since issuing their "Living Stereo" series on CD, RCA has also issued many of the recordings on SACD, and JVC has remastered many of them in XRCD24. Choices, choices....