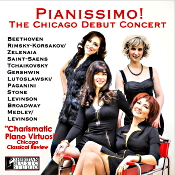 Yes, Pianissimo in music refers to a passage or movement played softly or very softly. But Pianissimo! also refers to an ensemble of four very talented pianists. As described in the disc's accompanying booklet, "Pianissimo! was first formed in December 2014, and recently appeared in several venues for "Make Music Chicago." As soloists and duo pianists, the four women have appeared in major concert halls and on TV and radio around the world, recorded a number of CD's, "and won numerous awards and honors, as well as accolades and rave reviews from major publications for their outstanding performances and programming."

The four members of Pianissimo! consist of Dr. Svetlana Beisky, critically acclaimed as "a passionate pianist and scholar," performing extensively in Europe, Asia, and the U.S. Next is Dr. Elena Doubovitskaya, "a native of Russia who established herself as a solo and collaborative musician after moving to the US in 1998." In addition, there is Irina Feoktistova, "a graduate of the Petersburg Conservatoire, Russia," who has performed in the major halls of Russia, Europe, and the United States. And Susan Merdinger, a Steinway Artist who has been hailed as "tender and impassioned" (Glasgow Herald) and "breathtaking" (Frankfurter Allgemeine Zeitung).

The opening overture from Beethoven shows off what can happen with eight hands at two pianos, and it's a rich and rewarding experience. The performers are brilliant in their own right, each a virtuoso, but together they are unmatched, and the playing produces an enriching few minutes.

The next item, the Rimsky-Korsakov fantasy, displays the talents of all four players on four pianos, making the number that much plusher and more opulent in sound and content, and making for a touching and exciting interpretation. And so it goes through the familiar repertoire of names like Beethoven, Saint-Saens, Tchaikovsky, Gershwin, and Rachmaninov in fantasies, variations, and single numbers. (The Danse Macabre for two pianos, eight hands, is particularly thrilling.)

Then there are the two newer selections from the Russian-born composer Ilya Levinson, selections that receive world-premiere performances. They have a more modern sensibility, of course, yet they take us back to an earlier period of twentieth-century American music, too, especially the Broadway medley arranged for four pianos. It pairs up favorite Broadway show tunes with seamless transitions to produce a rollicking good time. The four skilled pianists will make one forget all about Broadway pit orchestras in their lush and luxurious readings.

I should add, as well, that the disc offers a healthy seventy-six minutes of playing time, making the concert not only entertaining but also good value for the dollar.

Engineer Edward Ingold recorded the concert live at the Merit School of Music, Anne and Howard Gottlieb Hall in September 2015. Would I rather have heard Pianissimo recorded in a studio than live? Of course, it would no doubt have sounded even better without the constraints of a live audience present. Nevertheless, we have what we have, and I'm sure Pianissimo fans will enjoy the experience of the live moment. Besides, the wide dynamics of the presentations help to make up for any minor live deficiencies. For example, while there could be more presence, more high-end sheen, more brilliance, and more hall ambience on offer, the intensity of the music making always shines through and lights up the room.

Still, I really could have done without the applause at the end of each selection.