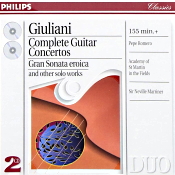 Quite a few years ago the editor of The $ensible Sound magazine, our own Karl W. Nehring, asked each of the magazine's reviewers to come up with a list of ten favorite recordings, "Desert Island Recordings" if you will. I was a little reluctant at the time to find ten among hundreds of favorites. Today, however, I am not so hesitant, and I included the First Guitar Concerto by Mauro Giuliani (1781-1829) in my current listing. You'll find it here: https://classicalcandor.blogspot.com/2009/12/desert-island-classics.html.

It was a recording previously available only on a full-price Philips disc, coupled with the Third Concerto, but in 1996 or so, for the same price as the single disc, Philips gave us all three of Giuliani's guitar concertos, plus over half a dozen others of his guitar works on a pair of CD's in Philips's impressive, and long lamented, Duo series. I can't begin to tell you how enjoyable this set is. And as far as I can tell, it's still available.

The First Concerto, which premiered in 1808, was a popular favorite in its day and deserves its popularity to our own time. It was to the nineteenth century what Rodrigo's Concierto de Aranjuez became to the twentieth century and beyond in terms of public acceptance. One could not ask for a lighter, happier, sunnier, sweeter, more charming piece of music, seductively performed by a master of the guitar, Pepe Romero, and accompanied by the ever-reliable Neville Marriner and his Academy of St. Martin in the Fields.

Giuliani's Second Concerto is darker in tone, and not nearly so much fun, but it's worth one's time because it's still better than almost anything else composed for the guitar. By the Third Concerto in 1820, Giuliani had become, for better or worse, far more sophisticated in his composition and arrangement; the Third Concerto's main attractions are its enchantingly beautiful slow movement and its brilliant finale.

Closer to the stylistic simplicity of the First Concerto, however, is Giuliani's three-movement Introduction, Theme with Variations, and Polonaise, a thoroughly enchanting piece that comes close to challenging the First Concerto for all-out charisma. Philips also include on the set the Gran Sonata Eroica, Grande Ouverture, La Melanconia, Handel Variations, and Variazioni concertanti. It is a pleasurable mix, to say the least.

Originally issued on three full-priced LP's, Philips recorded the pieces between 1974 and 1978. The sound is typical of Philips's late analogue work, not analytically clear but well focused, warm, and smooth. The guitar is prominently displayed but not too far forward.

On the whole, I can't think of a better way to while away a little over two and a half hours with pleasant listening than with these "Duo" discs. Highly recommended, obviously.