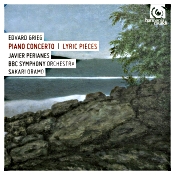 In the event you didn't know, Javier Perianes (b. 1978) is a Spanish concert pianist, who has won any number of prizes and played with many of the world's leading orchestras and conductors. Although he has done over half a dozen solo albums, he has recorded only a couple of pieces with orchestra. This disc of the Grieg Piano Concerto with Maestro Oramo Sakari and the BBC Symphony Orchestra is one of them. To be fair, however, he still goes it alone in the accompanying Lyric Pieces for solo piano.

Norwegian composer Edvard Grieg (1843-1907) wrote his Piano Concerto in A minor, Op. 16, in 1868, his first and only piano concerto. Odd, perhaps, given that Grieg was also a pianist. Anyway, with its wonderfully big opening moments and hints throughout of Norwegian folk music, the concerto quickly became one of the staples of the piano concerto repertoire.

The first movement opens with a famous and dramatic timpani roll, complete with cascading crescendos from the piano. Perianes captures the theatrical effect of these flourishes with energy galore, and, indeed, the whole of the first movement follows closely the excitement set out in the beginning. Tempos remain moderate; intonation is well nuanced; transitions, as into the second subject, are smooth and fluid; and Perianes seems always attentive to Grieg's designs.

The performance, in essence, is as big as they come, and Harmonia Mundi's close-up miking makes it seem all the bigger. Thus, if it's a grandiose reading you're looking for, this one is as massive and ambitious as they come. As I say, Perianes attacks the opening Allegro with vigor, practically banging the keys through the floor. And Maestro Sakari and the BBC Symphony accompany him with a flawless vitality of their own.

The second movement should be hushed and lyrical and continue to portray Grieg's ideas on the beauty of nature. Happily, Perianes balances the more robust sections of the score with an honest, gentle lyricism in these quieter parts. The middle of the first movement and this following Adagio sound lovely, and the final movement is as dashing, colorful, and beautiful as anyone could want. (Incidentally, Harmonia Mundi divides the second and third movements differently than we have come to expect, actually starting what most of us consider the final movement in the middle of the second track. The disc booklet provides no explanation.)

For a coupling, Perianes gives us eleven of Grieg's Lyric Pieces for solo piano. It is a good representative sampling of these little works, of which Grieg wrote sixty-six over a period of some forty years. Here again Perianes displays his softer, more-sensitive side, each piece sparkling. These are very Romanic, melodious works, which the pianist carefully executes with a straightforward delicacy and refinement. There is no hint of sentimentality about his playing. Still, when the occasion calls for an energetic virtuosity, as in "The March of the Trolls," he is on top of the situation. As a pianist Perianes can be both exciting and poetic, qualities that serve him well.

Producer Ann McKay and engineer Neil Pemberton recorded the Concerto live at the Barbican Centre, London in October 2014, and producer Martin Sauer and engineer Tobias Lehmann recorded the Lyric Pieces at Teldex Studio Berlin in June 2014. As with most live recordings, the engineers miked the concerto quite close up, especially the piano, which looms very large, practically in one's face. The orchestra, too, seems much too close, making for excellent detail and impact at the expense of its picking up some midrange brightness and edge. Fortunately, the producers edited out any applause, and audience noise is practically nil. Still, one gets a rather one-dimensional presentation, with good left-to-right stereo spread but almost no depth, air, or room ambience. The solo piano pieces, however, sound excellent, with a slightly more distanced perspective and more room resonance to give the instrument a greater natural warmth.