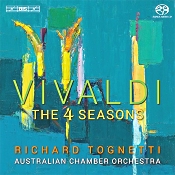 By my count this BIS album from Richard Tognetti and the Australian Chamber Orchestra makes the eight-hundred-and-first recording of Vivaldi's perennial favorite to appear in the last two-and-a-half weeks. Or so it seems.

Not that that's bad. It simply means that people love Vivaldi's Four Seasons, as well they should. The four concertos are remarkable for the impressions they can make on folks. And artists generally give people what they like, the fact that we probably don't need quite so much of a good thing notwithstanding. All that said, Tognetti and his Australian players do a pretty job with this new entry in the field.

As you know, Italian composer, violinist, teacher, and Catholic priest Antonio Vivaldi (1678-1741) wrote his Four Seasons as little three-movement tone poems, complete with the musical sounds of chirping birds, galumphing horses, barking dogs, dripping icicles, howling winds, and the like. The composer meant them to accompany descriptive sonnets, making up the first four concertos of a longer work he wrote in 1723 titled Il cimento dell'armonia e dell'inventione (The Contest between Harmony and Invention). Most people hardly remember the other concertos in the set.

Tognetti and company adopt some fairly moderate tempos for the four concertos, not as slow as most older, more-traditional approaches yet not as hurried as some more-recent period-instrument renditions. Tognetti, who conducts and plays the lead violin, takes a halfway path, a compromise if you will, that should offend no one. It's a sensible approach, to be sure, but one that might not be different enough, exciting enough, poetic enough, or descriptive enough to attract a lot of attention.

Most of the fast movements Vivaldi marked as allegros, brisk tempos. However, just how "brisk" is open to interpretation, as are most tempo markings, within reason. Therefore, you'll hear some Vivaldi recordings where the allegros are really quite slow and others where the players attack them with more speed and vigor. Again, Tognetti likes taking things at a healthy but not breathtaking gait.

As far as concerns rubato, Tognetti and his group provide a nuanced performance, hesitating when necessary, pulling up here and there, slowing up or speeding ahead whenever they feel the picture they are painting needs added punctuation. The result is a pleasantly vibrant set of variations within the movements that is isn't overly obvious or distracting but pleasingly entertaining. (Yeah, I might have liked a sweeter, more relaxed rendering of the Winter Largo, but that's simply a matter of taste.)

OK, so maybe you don't need another Four Seasons. Tognetti and his ensemble have it covered with the coupling, which maybe you do or maybe you don't have. They provide Vivaldi's Concerto in B minor for 4 violins, cello, strings and basso continuo, RV580; his Concerto in A minor for violin, strings and basso continuo, RV356; the Largo from the Concerto in D major, RV226; the Grave from the Concerto in D major, RV562; and the Sinfonia from La Verita in Cimento, RV739. These are certainly welcome, even if they do tend to sound more than a bit the same.

Like the Seasons, these supplementary pieces are satisfying realizations of music that can all too often sound merely tossed off. Tognetti offers us thoughtful accounts of the scores that sound imaginative yet not too extreme, with fine virtuosic playing from Tognetti himself and smooth, flowing accompaniment from his ensemble. Of all of them, I enjoyed the Concerto in D Largo best; beautiful music and beautifully sensitive playing.

Producer and engineer Jens Braun (Take5 Music Production) made the recording at the Concourse Chatswood Concert Hall, Sydney, Australia in March 2014. BIS have released the record on a hybrid SACD for stereo and multichannel playback (two channels from both the SACD and regular CD layers and multichannel from the SACD layer only, meaning you need an SACD player for SACD playback but just a standard CD player for two-channel CD playback). I listened to the SACD two-channel layer using a Sony SACD player.

As we have come to expect from BIS over the years, the sound is quite good. There's a nice, airy high end, a fairly well detailed midrange, and a bass and dynamic impact more than adequate for the job. The chamber orchestra, numbering about sixteen players, appears well positioned, not too close or too distant and extending left to right in a realistic spread. The solo violin is a tad close, but the ear quickly adjusts. Here, as anticipated, the clarity is even better than with the ensemble as a whole. A modest hall resonance adds to the natural effect of the proceedings without muffling any of the notes. A slight forwardness in the upper frequency range amplifies the disc's transparency without sounding too harsh or edgy. No objections here.