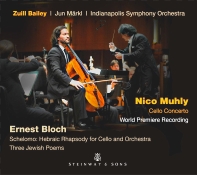 I've always thought of the three sections of Bloch's Schelomo ("Solomon") as representing birth, life, and death, but I suppose I'm just too simplistic (or simpleminded). Swiss-born American Jewish composer Ernest Bloch (1880-1959) described his Hebraic Rhapsody for Cello and Orchestra as a "psychoanalysis" of his own creative process, saying that the solo cello represents King Solomon and the orchestra the world around us, and the whole thing represented his own life experience. In another way of looking at it, the solo cello expresses Solomon's words as expressed in the Book of Ecclesiastes 1:2-9, and the orchestra reflects his inner thoughts. Fair enough.

Schelomo is the first item on this album from cellist Zuill Bailey, conductor Jun Markl, and the Indianapolis Symphony Orchestra, an album that also includes Bloch's Three Jewish Poems and a premiere recording of Nico Muhly's new Cello Concerto.

But first, Schelomo. Bloch wrote it in 1916-17, one of the composer's "Jewish Cycle." Bloch wrote of this period in his composing life, "I do not propose or desire to attempt a reconstruction of the music of the Jews or to base my work on melodies more or less authentic. It is rather the Hebrew spirit that interests me, the complex, ardent, agitated soul that vibrates for me in the Bible."

Bailey's playing is rhapsodic, and his Solomon sounds genuinely profound, brooding, and sorrowful. Everything about the soloist's performance and the orchestral accompaniment seems letter-perfect to convey Bloch's despairing moods and tone shifts. This is, in fact, one of the most-powerful readings of the score I've heard, powerful emotionally as well as powerful musically. Bailey has always appeared to me a rather forceful player, his cello always dominating a performance, and here he finds a perfect piece for his style. He simply becomes Solomon.

The first of two couplings on the album is a new work by Nico Muhly (b. 1981), Cello Concerto, here finding its world-premiere recording. Muhly himself describes it as "something formally traditional (fast-slow-fast) but with steadily developing content. The first movement is angular, the second supple and the third motoric; there is constant progression and no looking back."

Muhly's new work is obviously more modern than Bloch's, and one has to get used to its often sharper, more jarring qualities. Nevertheless, Bailey and his cello easily negotiate its insistent rhythms and occasional lyrical passages, and even if you don't care for the music, it at least keeps one's interest throughout. The second, slow movement is especially fascinating as it develops a shimmering line that gets more conspicuous as the decorative frills fall away and leave it to bask in the beauty of its own unpretentiousness. The final movement seems almost playful by comparison to the music that precedes it. Although I didn't find it a particularly memorable work, it's certainly fun while it lasts.

Then it's back to Bloch with the program's concluding work, his Three Jewish Poems for orchestra. These pieces have always seemed to me more Jewish than most of Bloch's other Jewish music, more freely infused with traditional Jewish folk tunes and inflections, perhaps because they were the earliest of Bloch's "Jewish Cycle." Markl and the Indianapolis Symphony do a good job keeping all of it fresh and alive, joyous or solemn as the situation demands.

One of the finest production teams in the country made the disc: Producer Thomas C. Moore and engineer Michael Bishop of Five/Four Productions, Ltd. They recorded the music at Hilbert Circle Theater, Indianapolis, and Clonick Hall Studio, Oberlin Conservatory of Music in August and November 2013. The sound is, in a word, superb. It's as realistically natural as you could want, with both the cello and the orchestra appearing to be in the same room with you. There's an almost startlingly lifelike quality present, the strings vibrant, the cello rich and mellow, the midrange transparency excellent, the air and space and ambience just right. Highs are well extended; bass is deep and solid; dynamics are strong and wide; I could go on. Suffice to say, this is among the best-sounding new recordings I've heard in quite a while.