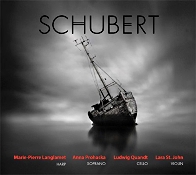 With a formidable lineup of players and some of Franz Schubert's lesser-known but still felicitous music, the album Schubert makes an attractive product.

First, the players: On harp we have Marie-Pierre Langlamet. She is the solo harpist of the Berlin Philharmonic. She's been on the international music scene since she was fifteen, she's performed with the major conductors and orchestras of the world, and she currently teaches at the Karajan Academy and at the Universitat der Kunste in Berlin. On cello we have Ludwig Quandt. He is the solo cellist of the Berlin Philharmonic. He's been playing the cello since the age of six, he joined the Berlin Philharmonic in 1991, and he made his solo debut under Claudio Abbado in 1996. On violin we have Lara St. John. She is a best-selling artist who has performed with many of the world's leading orchestras and owns and runs her own record label, Ancalagon, which produced the current album. And for voice, we have soprano Anna Prohaska. She made her opera debut at the age of seventeen, won numerous awards, and is presently a member of the ensemble of the Deutsche Staatsopher Berlin.

As for the music, it's Schubert (1797-1828), which all most of us need to know in order to enjoy it. As you're aware, the man wrote a ton of material, almost all of which went unpublished in his lifetime. The ten chamber pieces included on the present disc cover both his early and late years, so you'll find a good range of selections from his teens to his final year of life.

The program begins with three Songs of the Harper, Op. 12, Nos. 1-3, drawn from a novel by Johann Wolfgang von Goethe. Although the harp leads off these songs and accompanies the voice, it is really the singer that commands attention. Ms. Prohaska possesses a beautifully modulated voice that does full justice to these brief, introspective, melancholic tunes.

Next is the Sonatina for Violin and Piano in D Major, written in 1816 when Schubert was nineteen. Here, we find an early example of Schubert's playfulness at its best, with Ms. St. John's violin and Ms. Langlamet's harp (replacing the piano part) working splendidly together. The music alternates between slow and fast sections, and all of it is wonderfully lyrical, especially the performers' handling of the delectable Andante.

After that are three Impromptus, Nos. 2-4, transcribed for harp. Ms. Langlamet manages these Impromptus in positively gorgeous fashion, gliding effortlessly through each number. You'll feel you're being carried away on a cloud on a spring day the way she plays them. No. 3 is particularly enjoyable and would surely charm the most reluctant music listener.

Following the Impromptus is Gretchen at the Spinning Wheel, a song adaptation based on text from Goethe's Faust. This selection for voice and harp accompaniment gets the same meticulous treatment we heard at the beginning of the album. The tune is mournful, the rhythm suggestive of the turning of a spinning wheel.

Then, we hear the Sonata in A Minor for Arpeggione and Piano, an arpeggione being a six-stringed instrument, fretted and tuned like a guitar and bowed like a cello. These days a cello usually replaces the instrument. Here, a harp transcription accompanies the cello, so both parts are transcribed for other instruments. Nevertheless, the result is most pleasing, Mr. Quandt and Ms. Langlamet teaming up for a tranquil, nuanced rendering of this delightfully tuneful work.

Finally, we get the Piano Trio in B-flat Major, "Sonatensatz," from the year 1812, among the earliest of Schubert works. The piece makes an appropriate ending for the album, transcribed as it is for harp, violin, and cello, and the performers coming together for a grand reunion. I'm sorry there wasn't a part for Ms. Prohaska's voice in it, but we can't have everything. What a thoroughly lovely disc.

The Digipak case and the accompanying booklet are beautifully illustrated and handsomely laid out. However, the arrangement of booklet notes seems a bit scattershot, and nowhere could I find any track timings.

Producer and balance engineer Martha de Francisco, recording engineer Wolfgang Schiefermair, and editing engineer Jeremy Tusz made the album at Teldex Studio, Berlin in April 2013. The sound is ultrasmooth, often delicate, well balanced, and quite natural. Never do we find any brightness, hardness, edginess, or forwardness in the instruments or voice. It's sound that nicely matches and complements the music: warm and gentle. Incidentally, the packaging indicates that Ancalagon recorded the music in SACD, although they do not indicate anything more on the subject. I listened in a two-channel system using a standard CD player and then using an SACD player.