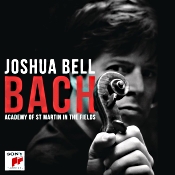 I said recently that I'm always a little suspicious of albums that feature the name of the star soloist over that of the composer he or she is playing. There seems to me a good deal of hype from the recording company and more than a touch of egotism on the part of the star involved. Fortunately, when the star is as far beyond reproach as Joshua Bell, it probably doesn't matter. In this case, all we get on the album's cover are the words "Joshua Bell: Bach." It's as if it doesn't even matter what he's playing; so long as we know who's involved, that should be all that counts. I admit I'm still a little put off by it, but I can't deny the results are decidedly agreeable.

So, the first things on the program are Bach's two Violin Concertos, No. 1 in A Minor, BWV 1041 and No. 2 in E Major, BWV 1042. Bell, as soloist and leader of the orchestra, takes both of them at a modest clip. There is no rushing about here to outpace the historically informed crowd. Nor is the reading too slow or sluggish. Instead, Bell takes a middle ground, providing a stylishly elegant interpretation that does the music proud.

The question, I suppose, is whether these performances are significantly better or at least different from a dozen other recommendable performances to warrant the disc or download purchase. Certainly, one can say that Bell is a commanding performer, his Bach concertos projected with authority. The articulation one hears in every note by the soloist and the orchestra is a cause for joy. So, yes, one senses a strong presence involved, and there's surely nothing wrong with that. Still, I'm not sure he erases memories of old favorites like Menuhin, Grumiaux, Kuijken, Meyers, Hahn, Zehetmair, St. John, and others. But that isn't the point, I'm sure. Mr. Bell is a modern star, and he will not disappoint his fans or Bach fans with his performances. And it goes without saying that the Academy of St. Martin in the Fields, seemingly pared down a bit for the occasion, perform with their usual impeccable finesse.

While I enjoyed Bell's control in the concertos, I liked the accompanying short pieces even more. First, there's the Chaconne, played in Mendelssohn's violin-and-piano arrangement with a further orchestral augmentation made by Julian Milone. Bell calls it an "arrangement of an arrangement" or a "homage to a homage." Whatever, it's delicious, subtle and refined, the orchestra never an intrusion on the detailed intricacy of the work, Mr. Bell's virtuosic musicianship always at the service of the music.

Following the Chaconne is the famous Air from Bach's Orchestral Suite in D Major, and ending the show is the Gavotte en Rondeau from the E Major Partita in an arrangement inspired by Robert Schumann's piano accompaniment. Bell handles these closing numbers with an exquisite sensitivity, making them a delight.

As I say, there is not much one can complain about here. The performances are first rate and the sound is fine. However, there is one minor personal annoyance I should mention that I'm sure most other folks wouldn't even notice. Now, understand, I realize that Mr. Bell is a superstar musician and all, and I recognize that he, his publicist, the orchestra, and the record company want to capitalize on his popularity. But I wonder if it's really necessary to have full-page pictures of the man on the booklet cover, the booklet back, the inside of the disc case, the back of the disc case, and two more within the notes? Plus several more pictures of what I take to be his hands. I mean, aren't six full-page pictures something like overkill in so small a product? Well, OK, picky, I know.

Adam Abeshouse produced, recorded, mixed, and mastered the album, so if you don't like the sound, you know who to blame. He made it at Air Studio, London in April 2014. The sound is a trifle close, but at the same time it's extremely clear and well delineated. The violin appears well incorporated with the orchestra, not too far out in front or too recessed. What's more, the instrument has a realistic resonance around it, making the strings easy on the ear. There isn't a lot of dimensionality or depth to the orchestra, though; it appears pretty much in the same plane as the violin. As to dynamic range, it is quite wide, probably more so than you would expect from a recording of Bach. In any case, it's all pleasant enough and should please most listeners.