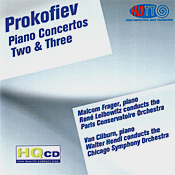 Like his contemporary Sergei Rachmaninov, Sergei Prokofiev (1891-1953) was a Russian composer and pianist, and like Rachmaninov, Prokofiev composed a number of piano concertos, five of them to Rachmaninov's four. However, in a bit of irony, Rachmaninov left Russia at the time of the Revolution, going on to produce fairly traditional Romantic music while Prokofiev chose to leave and then return to Russia where he almost continually butted heads with conservative Soviet censors for indulging in what they considered “anti-democratic formalism.” Be this as it may, both men left us a considerable body of works that remain popular to this day. The current disc collects two of Prokofiev’s more-famous piano concertos, Nos. 2 and 3, remastered by HDTT (High Definition Tape Transfers) from two equally celebrated recordings.

The first item on the disc is Prokofiev’s Piano Concerto No. 2 in G minor, Op. 16, which he completed in 1913, played by pianist Malcolm Frager, with Rene Leibowitz and the Paris Conservatoire Orchestra. The National Academy of Recording Arts and Sciences in 1961 nominated the Frager recording for a Grammy, and since then the recording has become something of a cult classic, made all the more desirable for its unobtainability until now on CD. Thank goodness for HDTT.

In No. 2 we notice an opening section of light delicacy from Frager, a characteristic of the pianist we hear throughout the work, mixed in with all the hurly-burly. Because Prokofiev intended the piece in part as a requiem for a deceased friend, it can be somewhat somber at times. Yet Frager, with his legendary dexterity, keeps it pulsating forward at a healthy clip. It is unlikely anyone will ever surpass his warm, expressive rendering.

The second item on the disc is almost as good, Prokofiev’s even more-popular Piano Concerto No. 3 in C major, Op. 26, which he completed in 1921 from sketches he began in 1913. The late pianist Van Cliburn plays it, with Maestro Walter Hendl conducting the Chicago Symphony Orchestra. Unlike Frager’s recording of No. 2, Cliburn’s performance of No. 3 has never been out of the catalogue. Maybe it has something to do with the public’s continued delight in Cliburn as well as their simply liking the Third Concerto more than the Second. Whatever, here on HDTT it sounds better than ever. The Third is more lyrical and melodic than the Second, nicely complementing Cliburn’s style.

Like the Second Concerto, the Third begins slowly and softly, quickly building up a head of steam with the piano’s entry and becoming ever more rhapsodic and tempestuous through its three movements. Cliburn’s handling of the work’s central theme and variations is particularly stimulating.

However, while I could not recommend anyone more highly in No. 2 than Frager, I still prefer Martha Argerich’s performance with Abbado (DG) and Byron Janis’s with Kondrashin to Cliburn’s in No. 3, if only by a small margin. 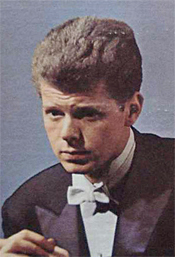 Decca (licensed by RCA) and RCA recorded the two concertos separately in 1960, No. 2 done at La Maison de la Mutualité, Paris, and No. 3 at Orchestra Hall, Chicago. HDTT’s remastering (and subsequent burning to an HQCD) of these performances sounds quite good, especially for recordings made over half a century ago. Or maybe they sound good because they’re over half a century old. I haven’t heard much in the past few decades to persuade me that today’s digital stereo recordings sound any better than what Mercury, Decca, RCA, EMI, Everest, Vanguard, Vox, and others were doing in the late Fifties and Sixties.

In any case, although I did not have the recording of No. 2 with Frager on hand for comparison, I had Cliburn’s RCA disc of No. 3, so let’s start there. What I heard tells me the HDTT remastering is slightly cleaner, slightly airier, and slightly more transparent, with a slightly better dynamic impact and slightly more-extended high end. No, these were not night-and-day differences; hence, the qualifier “slightly.” Still, the improvements in the HDTT sound were clearly noticeable and would probably make most audiophiles happy. Besides that, I don’t believe the Frager performance is even available on CD (at least, I couldn’t find it), so in that case one essentially gets a freebie with the HDTT disc.

The Concerto No. 2 displays good punch, with a reasonably flat frequency balance and a fine integration of the piano and orchestra. The overall impression seems a tad thick and heavy in the lower midrange, the piano sound crisp, the bass taut, and the orchestral support warm.

The Concerto No. 3 is a little more wide spread than No. 2, creating a bit more of a left-right effect, with the piano a touch bigger in the middle. The overall sound here is maybe a little clearer, with more sparkling highs.


For further information about the various formats, configurations, and prices of HDTT products, you can visit their Web site at http://www.highdeftapetransfers.com/storefront.php.