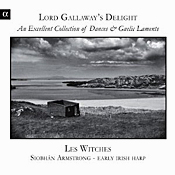 Quoting from a very old music publication, the French ensemble Les Witches describes the present album as “An Excellent Choice of the most celebrated Irish tunes, the finest English Country Dances & the best Scotch Humours, with several additional Fancies and Divisions never before recorded!”

OK, you might say, what’s a group of French musicians doing playing traditional Irish, English, and Scottish music? I suppose you could say the music transcends the boundaries of place and time, and Les Witches do as good a job as any I’ve heard of bringing this kind of music to life. The group comprises five members:  Pascale Boquet, lute and guitar; Odile Edouard, violin; Freddy Eichelberger, harpsichord and cistre (a sort of ancient mandolin); Claire Michon, flutes; and Sylvie Moquet, viola da gamba. Joining Les Witches is guest Siobhan Armstrong on the Irish harp because, as they say, you cannot have Irish music without a harp. And what better an exponent of the Irish harp than Ms. Armstrong, the head of the Historical Harp Society of Ireland.

Still, this kind of music is a bit of an acquired taste. All of the seventeenth, eighteenth, and nineteenth-century Irish, Scottish, and English instrumental tunes on the album appear tinged with melancholy, either a quality of the people who wrote them or a predilection of the musicians who chose to include them. In either case, it doesn’t change the eighteen tracks on the disc, which are delightful in their way but whose mood tends to sound slightly the same after a while. A little goes a long way? It helps, of course, that the players use historical instruments, which makes it all the more authentic and fun.

Anyhow, on the opening number, “She Rose and Leit Me In,” the six instruments enter one at a time, creating a surprisingly rich and complex texture. And so it goes. 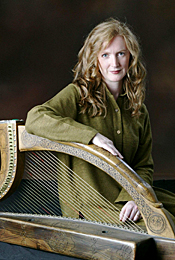 Flutist Claire Michon tells us in a booklet note that “with traditional musicians we share the pleasures of variation, ornamentation and improvisation, so expect to hear a bit of each style. Expect mainly, though, to hear gentle, committed, expressive playing, be it in dances or Gaelic laments. The music is melodic, sometimes rhapsodic, lilting, lyrical, and haunting. Most of all, it’s lovely, played with plenty of sweet, loving care.

While in fairness, I could not single out a “best tune” in the bunch, I know I strongly enjoyed the first number above, plus “Mary O’Neill,” “On the Cold Ground,” “Mary Halfpenny” (which sounds faintly of tinkling wind chimes), “Siege of Limerick,” and the closing air “Da Mihi Manum” (a melody that will have you close to tears). Yet, for that matter, they’re all gems, which, as I say, take a little getting used to. Once you acquire the taste, however, it’s hard not to want more.

Les Witches concocted their brew in 2012, with sound that is every bit as fascinating as the music. Indeed, the sonics steal the show. The highs sparkle, the midrange glows with clarity, and the bass, what there is of it, shows commendable tautness. There is a fine separation of instruments and a quick transient response, too. Most important, the recording venue imparts a sweet, natural resonance to the occasion, making the performances warmly lifelike.