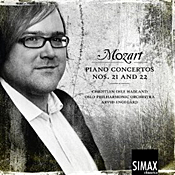 It seems as though new recordings of one or another Mozart piano concerto come out daily. Maybe it’s because Mozart wrote so many of piano concertos (twenty-seven in all), and people continue to like them (well, at least the last dozen or so). Or maybe it’s because pianists and conductors find so many ways to approach them (modern instruments and style, period instruments and practice, full and chamber orchestras, etc.). Who knows.  In any case, modern listeners already have a multitude of good recordings among which to choose, and I don’t suppose it hurts to have a new batch of contenders appear regularly (so long as listeners are not buying each and every one of them with money they may not have). With this Simax recording, we find Norwegian pianist Christian Ihle Hadland tackling Mozart’s Piano Concertos 21 and 22, a daunting task because they’re a couple of warhorses recorded many times over. Hadland comes through relatively unscathed.

Until I received this disc, I had never heard Hadland play the piano. He is, indeed, a sensitive, gifted musician. Whether he surpasses so many other pianists in this recorded repertoire, only the individual listener can determine. There are, after all, a number of fine pianists to consider, people like Stephen Kovacevich, Kristian Bezuidenhout, Daniel Barenboim, Murray Perahia, and a boatload of others.  Nevertheless, Hadland deserves his shot.

The album starts with the Piano Concerto No. 21 in C Major, K. 467. Because the filmmakers of a popular 1967 Swedish film titled Elvira Madigan used the second movement of No. 21 throughout their movie, people have since referred to the concerto as “Elvira Madigan.” Given Mozart’s penchant for theatricality, I’m sure it would please him.

Hadland handles the outer movements of No. 21 with a fine dexterity, and his playing exudes a joyful spontaneity. It’s that famous Andante that that bothers me. You can hear a snippet of it below. It seems to move along too quickly, without as much sentiment or feeling as other pianists have found in it, as though Hadland were saying, “You’ve heard all this before so often I thought I’d just get it out of the way as fast as possible.” It loses some of its dreamy, ethereal flavor in the process. This is not, however, to suggest Hadland doesn’t demonstrate some lovely, delicate technique or that the performance is without charm. The performance strikes one as quite spirited, in fact, and leaves one uplifted at the end.

Mozart completed the Piano Concerto No. 22 in E flat Major, K. 482 in 1785, shortly after writing No. 21. Therefore, expect some obvious similarities. Two major differences, though, are the composer’s use of clarinets in No. 22 and later a final-movement Allegro with a theme from his Horn Concerto No. 3. 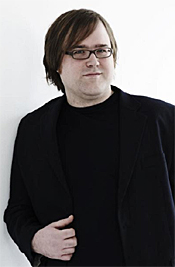 In No. 22, I still had memories of the Bezuidenhout recording with the Freiburg Baroque Orchestra lingering fresh in mind, Bezuidenhout’s recording being one I’ve become quite fond of. So Hadland’s newer rendering maybe had a little too much to live up to. Nevertheless, Bezuidenhout plays it on a fortepiano and Hadland on a modern piano, so any serious comparisons are inappropriate in any case. Hadland plays No. 22 with the same gusto we hear in No. 21, and while that part of the proceedings goes delightfully, it’s again the slow movement that gave me pause. Hadland seems so determined not to sentimentalize it that he sort of squeezes some of the breath out of it. Fortunately, the music has enough dramatic, operatic character to it that it survives pleasingly enough. Then there’s Mozart’s fetching “hunting” theme to conclude the work, Hadland treating it with high good humor.

Simax recorded the pianist and orchestra at the Oslo Konserthus in 2011, and while the sound may not aspire to audiophile standards, it’s pleasant enough. It displays a wide stereo spread, with reasonable depth and dynamics, yet there’s a warm, ambient glow to remind us of a realistic venue and not a dry studio. Midrange transparency is only average, and the piano looms rather large, appearing a bit too broad to sound entirely lifelike. Still, the piano, like the rest of the sound, communicates a sweet, if slightly soft, tone that is easy on the ear.