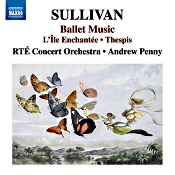 Many people today probably only know the British composer Sir Arthur Sullivan (1842-1900) from his collaborations with Sir William S. Gilbert, Sullivan writing the music and Gilbert the lyrics of their many hit light operas. But Sullivan’s work also includes operas, orchestral works, incidental music, songs, piano, and chamber pieces. Among them is the ballet presented here, L’Ile Enchantee (“The Enchanted Isle”), performed by Andrew Penny and Ireland’s RTE Concert Orchestra.

Sullivan wrote L’Ile Enchantee in 1861, and it was among his first orchestral compositions. He intended it as a divertissement, a light entertainment, a diversion, usually used during an interlude in a longer, more-serious work but here used at the end of Vincenzo Bellini’s opera La sonnambula at Covent Garden. The public received the music with acclaim, but the full score was subsequently lost.  We may consider Penny’s recording, in which Roderick Spencer and Selwyn Tillett have found and restored some previously lost passages, a world-première event. 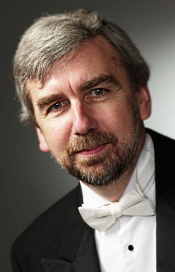 The opening Prelude has a serious Mendelssohnian feeling to it. The music continues with a whole parade of light, melodic, and wholly delightful tunes. There’s even a brief Strauss-like waltz involved. The story line of the ballet is negligible, to say the least. A shipwrecked sailor washes ashore on an enchanted island filled with gnomes and fairies (and thus the Mendelssohn reference). He falls for the queen, and the rest is...well, music. I’m surprised this little ballet didn’t catch on the way so much of Sullivan’s other music has. Whatever, Maestro Penny appears to be on top of everything--from the rollicking inner sections to the sweetest, most-gentle ones, and his Irish orchestra seems to be enjoying itself as well.

Accompanying L’Ile Enchantee are some snippets of ballet music from Gilbert and Sullivan’s Thespis (1871), their first collaboration together. However, they never published the piece, and most of it is now lost, except for the fragments of ballet from it we get here.

Producer Murray Khouri made the album at the National Concert Hall, Dublin, Ireland in April 1992. Naxos originally released the disc in their full-priced Marco Polo line but now offer it at a substantially lower price (although if you insist on paying more, you can still find it new on the Marco Polo label). I liked the sound a lot. It’s among the more natural recordings I’ve heard lately, even though Naxos recorded it some thirty years ago (or perhaps because they recorded it so long ago). The recording displays good depth, with more than adequate dynamics and frequency range. And all without a hint of brightness or edge.

Email ThisBlogThis!Share to TwitterShare to FacebookShare to Pinterest
Labels: Sullivan