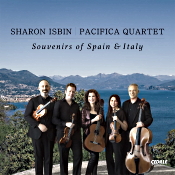 Sharon Isbin is an American classical guitarist, the founding director of the guitar department at the Juilliard School, a winner of multiple Grammy Awards, and a soloist with over 200 orchestras throughout the world. In other words, she knows what she’s doing. She began studying the guitar at the age of nine, she has recorded well over two dozen albums since her recording debut in 1978, and she has been going strong ever since.

Ms. Isbin is accompanied on the album Souvenirs of Spain and Italy by the Pacifica Quartet: Simin Ganatra, violin; Austin Hartman, violin; Mark Holloway, viola; and Brandon Vamos, cello. They perform four pieces by Spanish and Italian composers, giving us a little taste of both countries. To say that the performances are polished and sparkling would be an understatement.

First up on the agenda is the Quintet for Guitar and String Quartet, written in 1950 by the Italian composer, writer, and pianist Mario Castelnuovo-Tedesco (1895-1968). The composer described himself as “anti-modernist,” so the listener needn’t worry that we’re getting anything noisy, atonal, or avant-garde. In fact, the four movements are lovely, lyrical, with a poignant melody in the Andante. Ms. Isbin’s guitar playing is light and delicate when needed and robust in the finale. 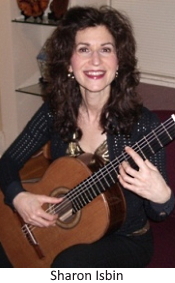 Next up is the Concerto in D Major, written in the 1730s by Italian composer, violinist, teacher, impresario, and priest Antonio Vivaldi (1678-1741). He originally wrote it for lute, strings, and continuo, but here we find it arranged and edited for guitar and strings by Emilio Pujol and Sharon Isbin. It sounds typically Vivaldi, although Ms. Isbin and her friends play it perhaps a shade more subtly, more gracefully than one usually hears from this composer.

After that is La oracion del torero for string quartet (“The Bullfighters Prayer”), written in 1925 and reworked in 1936 by Spanish composer Joaquin Turina (1882-1949). It’s a single, short piece, about eight minutes long, with a varying and colorful character. The quartet plays it alone with color and character, a sweetly engaging performance.

The program closes with the Quintet for Guitar and String quartet No. 4 in D Major “Fandango,” transcribed by the Italian composer and cellist Luigi Boccherini (1743-1805) from his own earlier quintet. It’s an elegant, flowing piece that was, for me, the highlight of an excellent set, combining the best of Italy and Spain. It makes an attractive way to end an entirely winning disc.

Producer Judith Sherman and engineer Bill Maylone recorded the music at Auer Hall, Indiana University, Bloomington, Indiana in January 2019. The sound is a trifle close-up, but it doesn’t distract from the music. The spacing of the players is especially distinct, and the instruments display good detail and clarity without a trace of brightness or hardness. It’s sound that should appeal to everyone, from audiophiles to earbud wearers.