From Holland with Love (CD review) 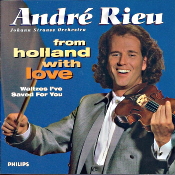 Maybe I'm a sucker for sentimentality, but just as I liked Ofra Harnoy's recording of romantically-paced, vibrato-prone Dvorak (RCA) over twenty years ago and which I listened to at about the same time, I enjoyed this disc of old favorites from violinist André Rieu the more I listened to it. This is saying a lot, too, considering that I’m not particularly fond of overrated superstar performers with tens of millions of records to their credit.


However, I wasn't instantly won over. During the first few selections I feared Rieu was only playing to the galleries, trying too hard to foist pop culture on the masses, commercializing and vulgarizing old favorites. His way with Anton Karas’s Third Man theme seemed to me especially romanticized, as did the opening selection, a medley of Strauss and colleagues' tunes. But I soon came to recognize Rieu's sincerity and joined in the spirit of the festivities. Evidently, the Strausses themselves had a high time with their music in concert and expected their listeners to do likewise. So, don't count on subtlety; Rieu plays for fun and merriment and hardly with subtlety or refinement.


Producer Ruud Jacobs and engineer Ronald Prent recorded the music at Wijngrachttheater, Kerkrade, and Philips Classics released it in 1994. The sound they obtained appropriately fits the style of the music making. It's big and bold, meaning close, and recorded in a fairly resonant venue, making the smallish, twenty-piece Johann Strauss Orchestra (which has subsequently grown much larger) seem bigger than it is. Interestingly, the program concludes with a fairly direct interpretation of "Roses from the South," almost as though Rieu were saying, "See, I can play it straight, too!" If you like traditional Viennese waltzes but can also keep an open mind, you might enjoy this collection.