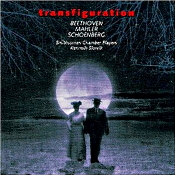 John's View:
This DHM (Deutsche Harmonia Mundi) release from 1996 may be as instructional as it is purely entertaining.

The program begins with Mahler's Adagietto from Symphony No. 5 (1901-02), the Adagietto composed as a love song for his wife Alma and the music becoming probably the most popular he ever wrote. Here, it is played on period instruments strung with gut rather than metal strings and performed with special attention to the playing technique and performance style one assumes preferred by the composer. Mahler gave instructions that it be played "very slowly," most conductors taking about ten minutes to get through it, yet Mahler himself played it in about seven minutes, which is about how long it takes Slowik. Interestingly, Slowik's interpretation is remarkably like that of Mahler researcher and amateur conductor Gilbert Kaplan's performance in that the tempo is much brisker than we are used to hearing on most modern recordings (and more like Mahler's). Yet, like Kaplan's reading, Slowik's recording works to good effect, perhaps because it appears to conform so readily to Mahler's intentions. Furthermore, the smaller size of the ensemble, the Smithsonian Chamber Players under the direction of Kenneth Slowik, helps to clarify textures, making it a unique experience worth in itself the price of the disc.

Following the Adagietto is Beethoven's Quartetto seriouso in F minor, arranged by Mahler in 1899 for string orchestra. It seems a bit bulky for its own good, but it retains an admirable inner beauty.

Next comes Schoenberg's Transfigured Night, using the 1917 arrangement scored for string orchestra. This is the centerpiece of the disc's agenda and almost comes into direct competition with a version by the Orpheus Chamber Orchestra (DG). The two interpretations sound very much alike except for the slightly smoother tone of the Orpheus Orchestra's newer, modern instruments. Both versions are well recorded, but this newer disc is a touch more transparent.

The album continues with several excerpts from vintage Mahler recordings of the 1920's and 30's for reference points; and it concludes with Arnold Schonberg's 1950 program notes to "Transfigured Night," read in the original English by Richard Hoffmann, Schonberg's secretary and assistant from 1948-51.

The highlight for me, then, is the Adagietto, for its beauty and authenticity. The Schoenberg is a good companion to the Orpheus rendition, hearing Transfigured Night in somewhat different, perhaps more historically attuned sound. And the other bits and pieces make for enlightening listening and learning. With exceptionally warm, clear sound, this disc is a distinctly recommendable buy.

Karl's view:
Be forewarned: this CD is fascinating from the point of view of someone who loves Mahler and wants to learn all he or she can; however, it is also a CD that even for the Mahler fan will probably not be played more than a few times. I will quickly say that I enjoyed the chamber orchestra arrangement of the Beethoven quartet, but have no real desire to hear it again, and let's face it, Verklarte Nacht is something that many music lovers want to hear only occasionally. When you get right down to it, then, the only real attraction on this disk is the Mahler Adagietto.

While Gilbert Kaplan makes a point of playing the Adagietto faster than most conductors tend to play it (7:57--the excellent Abbado 5th on DG has it at 9:01, while I seem to recall that Leonard Bernstein would linger over it for 10 or 11 minutes), Slowik gets through it in an even faster 7:28. And while Kaplan draws a beautiful sound from the London Symphony Orchestra, the smaller forces under Slowik, playing older instruments and sliding spookily (portamento) between notes, manage to make an entirely familiar and beautiful piece of music sound downright strange, perhaps even a bit weird.