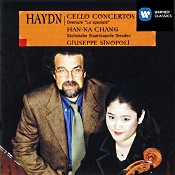 This Haydn disc did double duty in its several weeks of evaluation prior to my writing these comments, serving not only as a usual test subject but as background music for several dinner gatherings. Like a coincidentally similar disc of material from Steven Isserlis and Roger Norrington on RCA, I found this EMI issue (now released by Warner Classics) delightful through and through, and I look forward to many years of continued listening to its charming melodies.

Haydn's bracing Cello Concerto in C that opens the program makes an engaging contrast to the more serene Concerto in D. Between them is the three-movement Overture from Haydn's comic opera Lo speziale, an animated, if somewhat repetitive, work.

Ms. Chang's playing is light and lyrical, particularly complementing the Concerto in D. The Dresden Staatskapelle remain one of the world's great orchestras, and Maestro Giuseppe Sinopoli leads them through the music with little fuss. While it is perhaps true that some listeners would have liked more forward, maybe more idiosyncratic interpretations than the ones presented here, I doubt that most classical-music fans will find much to criticize. These are elegant, poised performances rather than overtly virtuosic ones.

The recording, originally issued by EMI in 1998, sounds well balanced throughout, with the cello realistically placed, a little close but not dominating. The orchestra and cello both have good definition and immediacy, yet they retain a warm aural bloom. Imaging, too, is good, though not so precise in the localization of individual supporting instruments as on some older, more modestly-miked recordings.

I'm glad I don't personally have to make a choice between this disc and the Isserlis/Norrington one I had on hand at the time, but if I did I would probably choose this one for its slightly more natural sound and its sweeter, gentler approach. Then, too, there is Jacqueline DuPre's EMI/Warner disc, which also has it merits. Nonetheless, this disc from Chang/Sinopoli is hard to resist; I recommend all three for purely casual, relaxing, and highly pleasurable listening.