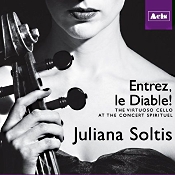 Because Entrez, le Diable! appears to be cellist Juliana Soltis's debut album, many listeners may not be familiar with her work. From her Web site we read: "Raised among the rich musical traditions of Appalachia, cellist Juliana Soltis performs across the globe as both soloist and chamber musician. She has appeared as soloist with the Oberlin Baroque Orchestra and the Harvard Baroque Orchestra--with the latter ensemble receiving the Erwin A. Bodky Award for Early Music--and her European debut in Venice, Italy was met with critical acclaim. An active recitalist with performances in Boston, San Diego, Seattle, and Washington, D.C., in the 2015-2016 season Ms. Soltis was a featured performer on the Gotham Early Music Society's Midtown Concerts series in Manhattan, and toured Japan performing the Suites for Unaccompanied Cello by Johann Sebastian Bach.

"As a chamber musician, Juliana has performed at the historic Brick Church in New York and the Early Music America Young Performers Festival at the Boston Early Music Festival, and has concertized with the members of the Venice Baroque Orchestra. With her ensemble Die Liebhaberin ('The Enthusiasts'), she has appeared on the Millennium Stage Concert Series at the John F. Kennedy Center for the Performing Arts in Washington, DC, receiving praise for her 'thought-provoking' and 'beautifully articulated' interpretation. Ms. Soltis has participated in masterclasses with Jaap ter Linden, Bart Kuijken, Giuseppe Barutti, and Yo-Yo Ma, and holds degrees from the New England Conservatory, Ball State University, the Longy School of Music, and Oberlin Conservatory. A dedicated and passionate performer-scholar, she has pursued studies in modern cello with Yeesun Kim and Richard Aaron, and historical cellos and viola da gamba with Phoebe Carrai and Catharina Meints Caldwell.

"Currently residing in Seattle, WA, Juliana can be heard performing with some of the Pacific Northwest's premiere Early Music ensembles, including Pacific MusicWorks and Early Music Vancouver, as well as on the Gallery Concerts Series and the Seattle Early Music Guild's Northwest Showcase.

"She is privileged to play on an antique instrument, dated Salzburg 1677 by Andreas Ferdinand Mayr and restored by Warren Ellison of Jericho, VT and Curtis Bryant of Watertown, MA."

The program offers sonatas by Salvatore Lanzetti (1710-1780), Martin Berteau (1691-1771), Francois Martin (1727-1757), Jean-Baptiste Barriere (1707-1747). If these are not exactly household names, understand they were among the first composers to write for the cello, taking the stage for a series of concerts known as the "Concert Spirituel."

The album makes for fascinating listening, as long as you are willing to adjust your expectations somewhat. This is not Romantic cello music by any means, nor does the baroque instrument produce the smoother, richer, or more mellifluent tones of a modern one. Still, there is much here to enjoy. For instance, there is an especially scintillating opening movement and then a lovely Adagio in Lanzetti's opening sonata, which Ms. Soltis handles with loving care (as she does throughout all the pieces on the program). Its closing Allegro, too, is charming in its expectedly livelier, more-spirited style. The Berteau work appears more serious than the others, almost grave in the first two movements before a third movement Allegro of greater animation, receding into a final section that returns us to the leisurely tempos with which the piece began.

Ms. Soltis tells us in a booklet note that Martin intended the first movement of his sonata played with the use of the performer's chin on the fingerboard rather than the fingers to sustain a pedal tone. This resulted for her, Ms. Soltis says, "in an elaborate arrangement of Band-Aids attached to the underside of my jaw." Regardless of the discomfort, the result for the listener is a most-rewarding and highly expressive interpretation.

And so it goes through the disc's final two sonatas by Barriere, highlights for me being the delightfully enchanting Aria amoroso section of his Sonata in D Major and the opening Largo of his Sonata in B Minor. Why in the world don't we hear these things more often?

Ms. Soltis's playing is evocative, technically skilled, joyous when necessary, and often downright beautiful. The album offers a privileged glimpse into a musical world of long ago that many of us may not have heard before: in this case, to the beginnings of the cello, an instrument for many years not thought fit for a proper solo position.

Producer Geoffrey Silver and engineers Kevin Bourassa and Christian Amonson of Arts Laureate recorded the music at the Dorothy Young Centre for the Arts, Drew University, Madison, New Jersey in January 2016. There is excellent clarity about the instruments. The baroque cello, as I've noted, doesn't have as rich a sound as a modern one, but it does produce a fine, resonant sound. The other instruments display clean, vibrant tones. It's a most-realistic presentation.