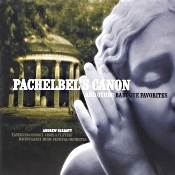 The 1980's saw a huge upswing in the popularity of the period-instruments movement, and conductor Andrew Parrott and his Taverner Players and Chorus were right there in the forefront of the action. Today, we tend to take period instruments for granted, even if with the downturn in classical music recording in the 1990's and beyond, we don't hear about them so often anymore. One result of that situation is this 2004, two-disc, budget rerelease of Baroque favorites by Parrott and his players, plus a few by him and the Boston Early Music Festival Orchestra.

EMI originally issued all of the pieces on the discs in the late Eighties and early Nineties, the company recording all of them digitally. In 2004 they assembled the current program and issued them under the Virgin label. Frankly, there isn't a weak link among them.

The Pachelbel Canon of the album's title is among the best I've heard (and there must be 800 recordings available). Like the other works in the collection, the interpretation sounds a little brisk, but it never sounds rushed, never breathless as some period-instrument ensembles play early music.

Likewise, Parrott presents the other works in the set with a vigorous refinement: Bach's Brandenburg Concerto No. 2; excerpts from his Orchestral Suites Nos. 2 and 3; Vivaldi's "Spring" and "Summer" concertos from The Four Seasons; Purcell's Funeral Music for Queen Mary; and others by Gabrieli, Allegri, and Monteverde. Perhaps my personal favorite, however, is Parrott and company's rendering of Handel's Harp Concerto in B-flat major, with Andrew Lawrence-King on harp. It's simply gorgeous.

The sound is also remarkably good throughout most of the music, perhaps a tad less vibrant in the two selections with the Boston orchestra than with the Taverner Players. Still, nothing is ever overly bright or edgy, so one need not worry about any period-instrument fatigue setting in, a condition common to such recordings early on, especially those recorded digitally. At a price new of only a few bucks or so for the two-disc set, it's a bargain, indeed.