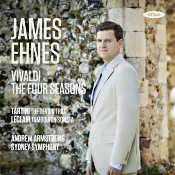 There must be more recordings of Vivaldi's Four Seasons than there are leaves in the autumn wind. And they already come in every variety imaginable, from chamber orchestras to large ensembles, from period instruments to modern. In order for a new recording of the Seasons to make any impression at all, it has to have some unique characteristic going for it. A recently unearthed original manuscript perhaps; a new transcription for accordion or flugelhorn; or a performance by a noted soloist. In this case, it's a noted soloist: the Canadian concert violinist James Ehnes, who has over three dozen albums to his credit.

The next question is whether even a noted soloist can do anything different with the music. In this case, I'm not persuaded. Ehnes is a fine violinist, and he gives it his best shot. But, frankly, the results don't sound much different from a hundred other interpretations of the music. Which is not to say there is anything wrong with Ehnes's performance. It's quite good, in fact. It's just that there are so many other competing versions that offer something a little more in the way of imagination, zip, energy, brilliance, subtlety, nuance, sound, or what have you.

Anyway, as you doubtless know, Italian composer, violinist, and Catholic priest Antonio Vivaldi (1678-1741) wrote The Four Seasons as a part of a longer work, Il cimento dell'armonia e dell'inventione, "The Contest between harmony and invention." Vivaldi's publisher released them in 1725, a time when the musical world was little used to music representing the sights and sounds of the environment around them. Vivaldi's little three-movement concertos were complete with the musical sounds of chirping birds, galumphing horses, barking dogs, dripping icicles, howling winds, and the like, meaning for them to accompany descriptive sonnets. The music became among the first and probably most-famous tone poems ever written.

Even though the sonatas appear first on the present disc's program, I listened to the concertos before anything else. Here, Ehnes, leading players from the Sydney Symphony, impressed me with his levelheaded approach to the music. It is neither dizzyingly fast nor mind-numbingly slow. I suppose a lot of Vivaldi fans will find it lacking the excitement of, say, Fabio Biondi and his Europa Galante, yet its moderate tempos seem properly judged. What's more, the cushy, comfortable sound of the Sydney players helps make the music appear less abrasive than it can sometimes sound. Indeed, almost everything Ehnes does here seems well judged, from the pacing to the early musical impressionism.

However, what struck me most was Ehnes's handling of the concertos' slow movements. The violinist's manner is elegant and graceful, the slow movements especially fluid and refined. And it's not that Ehnes doesn't whip up a requisite degree of excitement elsewhere, either; a listen to his handling of the contrasting elements of the allegros proves that. It's just that there is a delicacy about the largos and adagios that sounds quite charming.

Ehnes plays with a consummate skill and virtuosity, and his Sydney ensemble provide him a warm, comfortable accompaniment. One can only admire the musicianship throughout.

Would I recommend Ehnes, however, as a first choice in this repertoire? Probably not because I still think folks like McGegan (PBP), Kuijken (Sony), Sparf (BIS), Pinnock (DG Archiv), Lamon (Sony), Perlman (EMI or Hi-Q), Marriner (Decca), Silverstein (FIM or Telarc), Biondi (Virgin), Jansen (Denon), and I Solisti Italiani (Denon) among others have made more of these scores in terms of inventiveness. Nevertheless, Ehnes is a good middle-of-the-road possibility for those music listeners who want something a little more conservative yet still highly musical and satisfying.

Accompanying The Four Seasons, we find the Violin Sonata "Il trillo del diavolo' in G minor by Italian violinist and composer Giuseppe Tartini (1692-1770) and the Violin Sonata 'Tambourin' in D by French violinist and composer Jean-Marie Leclair (1697-1764). Maybe because I was so much more familiar with the concertos and had heard them so often over the years, I found these sonata couplings more to my liking. Ehnes displays a gentle and persuasive touch and Andrew Armstrong a calm, temperate accompaniment, making these works enormously enjoyable.

The sound in the concertos is a bit forward but quite clear. Although the somewhat close-up miking and the slight upper-midrange brightness may be little distracting for some listeners, one cannot deny they help immensely in terms of detail and transparency. There isn't a lot of dimensionality front-to-back, either; still, the left-to-right stereo spread sounds realistic, and the whole enterprise appears brilliantly and cleanly alive. The sound in the sonatas is warmer than in the concertos, the two instrumentalists appearing quite natural in terms of overall frequency balance and their environmental setting. No complaints here.