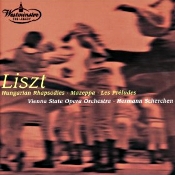 For those of you old enough to remember the original Westminster label, it was one of the most "major" of the minor record companies and produced classical LPs from the early Fifties to the mid Sixties. At various times ABC, MCA, and most recently DG owned or distributed the recordings themselves, and one could also often find them under the "Music Guild" appellation. Anyway, in the early 2000's they began reappearing again on the original Westminster label, and I found a few of their reissues quite welcome, like this one.

Hermann Scherchen, one of the old Westminster company's biggest stars, conducts the present release, and it features Westminster's famous "natural balance" sound. Scherchen (1881-1966) could hold his own with any modern interpreter, and given the age of the recordings, 1958-1960, they, too, sound remarkably good. Here, Scherchen is leading the Vienna State Opera Orchestra, which included mainly members of the Vienna Philharmonic, so there's not a lot of doubt about the quality of the music making, even though the Opera Orchestra doesn't sound as luxuriously polished as the Philharmonic, and intonation doesn't appear as solid. Who knows.

While Scherchen could occasionally be overly enthusiastic in his conducting, even leaning to eccentricity at times, here he eschews too much bombast, something these Liszt works can easily succumb to, the conductor handling some of the showier sections with a pleasing refinement and nuance. The Rhapsodies, which appear to be mainly Liszt's own orchestrations of his piano works rather than some of the more popular reworkings, don't always come off as glamorously or dynamically as, say, Dorati's (Mercury), Boskovsky's (EMI), or Stokowski's (JVC or RCA), but Scherchen skillfully manages each piece, providing them with plenty of reserved flair and inner feeling. OK, to be fair, maybe he's too cultured in these pieces for some tastes, but, whatever.

Les Preludes, Mazeppa, and the Battle of the Huns on the other hand, sound as powerful as they come, so I suppose that makes up for a little less drama earlier. Then, oddly, the Mephisto Waltz appears to drag a bit. Go figure. What's important is that each listener will have his or her own personal likes and dislikes.

The remastered sound from 2001, using a process called "Original Image-Bit Processing," is fine and captures the natural quality of the music making. There is, however, a fair degree of background noise on some of the 1958 recordings, especially, tape hiss and miscellaneous soft thumps and gurgles. It's not enough of a distraction to put one off the music, but it is present, nonetheless, so I thought I'd mention it. Otherwise, the sound is very slightly soft and a tad rough, but it is extremely well imaged left to right, with a reasonable amount of detail and orchestral depth. Offered at a low price, this two-disc set seems a safe bet for the Liszt lover.