Prokofiev: Peter and the Wolf and Jazz! (CD review) 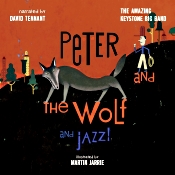 The idea of fusing classical and jazz (or pop) has been around for a long time. For instance, jazz player Jacques Loussier and his group have been doing it quite successfully for over half a century. Whether die-hard classical or jazz fans find the fusion entirely satisfying is another question, but as a once-in-a-while novelty, such fusions sometimes work.

Anyway, what we have here is Peter and the Wolf (1936) by Russian composer Sergei Prokofiev (1891-1953) adapted for big band, in this case The Amazing Keystone Big Band. Prokofiev's intention was to introduce children to the sounds of a symphony orchestra by telling a children's story with various instruments of the orchestra representing the various animals and humans in the tale. In the present case, the idea is to introduce children to the sounds of a big, eighteen-piece popular band, with jazz instruments taking the place of symphonic ones. And, of course, to help sell any new recording of the Prokofiev classic, you must have a famous actor narrator the proceedings, in this case David Tennant (Doctor Who, Broadchurch, Gracepoint).

Everything comes off as expected, with the big band instruments doing an acceptable job imitating their counterparts in the symphonic orchestra. It's all quite jazzy, and it should please most kids. For adults, I'm not sure it's good jazz or good classical, but it goes down easy.

Tennant makes a cheerful, enthusiastic narrator, and the band plays competently. Although I didn't find any of this material particularly inspiring, there is nothing particularly boring about it, either. As I say, the producers pretty much meant it for children, so I'm sure it will amuse them.

Coupled with the Prokofiev is a series of items that is a sort of continuation of the story with instruments playing various animals, selections that I actually enjoyed more than the main item. There are the "Bird's Tweet," the "Soulful Cat," the "Elegy for a Duck," the "Hunter's Blues," "Beware of the Wolf," "Grandpa's Shuffle," and "Peter's March." Even though they don't match Prokofiev's inspiration, they display perhaps a tad more spark from the orchestra, which may have been playing it too reverentially in the main attraction.

The disc comes packaged in a sturdy Digipak container, with a well-explained and well-illustrated (by Martin Jarrie) booklet.

Executive producer Christian Girardin and engineer-director-editor Alban Moraud recorded the big-band music at the Studio of Theatre Durance, Chateau-Arnoux, France in February 2013 and the narration at Soho Voices, London in January 2015. The sound appears relatively distanced for this type of essentially pop music. The big band has a lot of air and space around it, the venue fairly alive with a healthy resonance. Then, too, the sound is slightly warm and soft, further reinforcing the notion that we are listening a little farther off than usual. The voice seems natural enough, although it, too, seems somewhat soft, even though the engineers recorded it separately and closer up. Still, it's all easy to listen to, just not quite audiophile material.