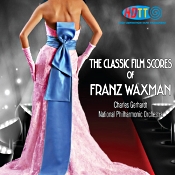 Franz Waxman (1906-1967) was one of a handful of great film composers born and educated in Europe--in his case Germany--who came to Hollywood just after the introduction of sound to motion pictures. Waxman took his place alongside such other notables as Max Steiner, Alfred Newman, Bernard Herrmann, Dimitri Tiomkin, and Erich Wolfgang Korngold.

In 1972 RCA asked American conductor Charles Gerhardt (1927-1999) and the National Philharmonic Orchestra to make a series of classic film score albums, which they did, completing fourteen of them between 1972 and 1978. They were highly successful largely because of Gerhardt's personal pride in the music and careful preparation of the texts and because of the excellence of the sound RCA afforded him. On the present disc, we have Gerhardt's renditions of eight Franz Waxman film scores in abbreviated form (obviously, Gerhardt didn't have room for the complete soundtrack scores of all eight movies). More important, we have the music remastered by HDTT (High Definition Tape Transfers), who always do such a fine job ensuring that we hear the best sound possible.

The selections included on the program are "Music from Prince Valiant," "A Place in the Sun Suite," "The Bride of Frankenstein," "Music from Sunset Boulevard," "Old Acquaintance Elegy for Strings," "Music from Rebecca," "Music from The Philadelphia Story," and "Tara Bulba: The Ride to Dubno."

Gerhardt, as I say, had a flair for this kind of thing. Take the opening track, for instance, the "Prince Valiant" music. It begins with the kind of swashbuckling fanfare pioneered by Franz Liszt in Les Preludes, Richard Strauss in Don Juan and Ein Heldenleben, and Erich Korngold in "The Sea Hawk," a tradition that John Williams would continue in "Star Wars." Here, Gerhardt has fun with it, emphasizing the connections to its antecedents and making a grand, sweeping statement. Yet when the suite comes to its gentler passages, Gerhardt is up the task with a sweet, smooth touch.

And so it goes throughout the program. I liked the lush, bluesy feeling of "A Place in the Sun"; the busy-then-languid L.A.-Hollywood atmosphere of "Sunset Boulevard"; the mysterious yet romantic moods of Hitchcock's "Rebecca"; the excitement of "Taras Bulba"; heck, I even liked the MGM lion's roar in "The Philadelphia Story." 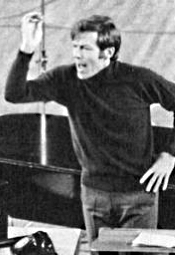 Probably my absolute favorite music among the bunch, though, is the selection from "The Bride of Frankenstein." The movie itself is, for me, a milestone in filmmaking, from its impressionistic set design, contrasting shadow effects, free-flowing camera work, and innovative direction to Waxman's eerie, grotesque, expressionistic musical score, with its haunting central subject. Gerhardt plays it wonderfully, exposing every dark corner of the story.

Producer George Korngold and engineer Kenneth Wilkinson recorded the scores at Kingsway Hall, London in July 1974, and HDTT transferred the recording from an RCA 4-track Dolby-encoded Quadraphonic tape in 2015. HDTT make the disc available in 4.0 multichannel-surround 24-bit/192 kHz downloads on FLAC or Blu-ray and in two-channel stereo on CD, DVD, HQCD, and various downloads including PCM FLAC 24-bit 96 kHz and 24-bit 192 kHz.

There's a very wide dynamic range involved, so be prepared for some realistic sonics, with excellent impact. It also sounds well balanced, a tad dark in tone but with none of the frequencies appearing to upstage the others. The bass is strong and firm; the midrange is clear, well focused; and the highs sparkle. Moreover, there is a good deal of dimensionality to the sound, left-right, front-back, and enough hall resonance to remind one of a real concert. This is very impressive, very lifelike sound, the kind we don't find in much of today's close-up and made-live recordings.

Email ThisBlogThis!Share to TwitterShare to FacebookShare to Pinterest
Labels: Waxman