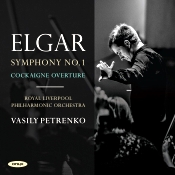 Yes, Elgar wrote more than the Violin and Cello Concertos, the Enigma Variations, and a series of marches. But, of course, you knew that. Especially if you are a classical music fan, or if you are English. Sir Edward Elgar (1857-1934) was one of England's greatest and most-famous composers. On the current disc, Vasily Petrenko and the Royal Liverpool Philharmonic present the first of Elgar's two symphonies, along with the Cockaigne Overture. The symphony can be pretty heady stuff, unless you already enjoy the pomp and circumstance of Elgar's marches, in which case you'll find yourself right at home with it. It's all very grand, very imposing, very Elgarian.

Anyway, Elgar wrote his Symphony No. 1 in A flat, Op. 55, in 1908, just a few years after he completed the first four of his Pomp and Circumstance Marches, and he apparently had plenty of pomp and circumstance left over for the symphony. In describing the music, Elgar said "There is no programme beyond a wide experience of human life with a great charity (love) and a massive hope in the future." So, yes, it is an optimistic work, full of noble ambition.

Maestro Petrenko's handling of the symphony is very optimistic and ambitious, indeed, although I confess while listening to it that I couldn't completely erase my own fondness for the recordings of my earlier days: Sir Adrian Boult's account with the London Philharmonic (EMI); Sir John Barbirolli's recording with the Philharmonia Orchestra (EMI); Sir Georg Solti's rendering with the London Philharmonic (Decca); and later recordings from Richard Hickox, Vernon Handley, and Mark Elder among others. By comparison, this new reading by Maestro Petrenko seems just a tad staid, reticent, less grand. But comparisons are sometimes deceiving, and certainly there is much to commend about Petrenko's performance.

The first movement alternates from the noble and processional to the simple and straightforward, and Petrenko does his best to make the transitions as seamless as possible. Still, he seems a bit reluctant to let loose, perhaps fearing that the music can too easily become bombastic if he does so. Nevertheless, he keeps tempos on the moderately brisk side, so the music flows effortlessly and eloquently along, ending in a proper tranquility.

The second-movement Allegro acts as a scherzo, which Petrenko plays with a vigorous, masculine security. Under this conductor, the music marches relentlessly forward, interrupted only briefly here and there by several kind of pastoral interludes, then back to its relentless martial attitude. Again, it's not easy to hold all this together without the pieces seeming disparate and even unhinged, but Petrenko again does his best, and his Liverpool players do an admirable job smoothly following his lead.

The Adagio that follows is a sort of replica of the preceding music but at a much slower pace. Here, Petrenko does, indeed, slow down, even to the point I thought a tad too much. Still, it makes for a pleasant, tranquil pause in the action.

Then we get the finale, which returns us to Elgar's alternating slow-fast-slow-fast design, with Petrenko handling the march segments with a fine gusto. At the conclusion, the conductor makes sure we understand Elgar's themes, as he re-emphasizes the pomp-and-circumstance elements of the music.

The coupling actually comes first on the disc, the Cockaigne Overture, so named because, as Elgar explained, "Cockaigne is the old, humorous (classical) name for London and from it we get the Cockney." However, the work doesn't really describe the London of Elgar's day (he premiered it in 1901) with any precision, nor did he intend it to be an accurate tone poem; in fact, Elgar had hardly spent much time in London at all. Instead, the score is more of a merry, energetic, effervescent romp through the city's streets as Elgar's rather optimistic mind envisioned the place. I rather enjoyed Petrenko's handling of the overture because he adds a light, fleet touch to the music that brings out its playful, even celebratory qualities.

Producers John Fraser (Symphony) and Andrew Cornall (Cockaigne) and engineer David Pigott recorded the music at the Liverpool Philharmonic Hall in July and September 2009. I'm not sure why it's taken so long for Onyx to release the disc. Whatever, the sound is warm and natural and moderately distanced rather than being anything close-up, bright, or edgy. It's also nicely centered left-to-right, with at least a modicum of orchestral depth and a decently robust dynamic range. A little hall resonance adds a bloom to the sound, too, making it fairly lifelike, though somewhat soft and not particularly transparent or impactful in any audiophile sense (except in parts of the overture, which sound more dynamic to me than the symphony).