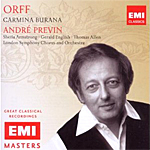 Recorded in 1974, this performance of Carl Orff's Carmina Burana by Andre Previn and the London Symphony Orchestra remains one of my favorites. EMI reissued it at mid price in their "Great Recordings of the Century" line in 1998, and in 2010 it's back in their "Masters" series, as good as ever.

There are two advantages to this disc over EMI's very first CD mastering: Superior sonics and a cheaper price. The 1997 audio quality is very slightly smoother and a touch fuller than the transfer before it. Being over three-and-a-half decades old, it is an analogue recording, of course, but the Abbey Road Technology remastering removed some of the edge one may have noticed in the earlier full-priced CD; not all of it, but enough. None of the added warmth detracts from the earthiness of Previn's interpretation, though. It is still full of love and lust and other sensual delights.

For those few of you who may not be familiar with the work, Carl Orff published Carmina Burana in 1935 and based it on the collected songs and poems of thirteenth-century minstrels. There are several dozen short vocal pieces in the assemblage plus orchestral accompaniment, grouped together in four sections. The music is vivid and vibrant, especially in Previn's hands, and it speaks mainly of the yearnings and pleasures of the flesh.  For example, "Sweet, rosey-hued mouth, Come and make me well"; "Love flies everywhere, He is seized  by desire. Young men, young girls, Are rightly coupled together"; "The girl without a lover, Does without any pleasure"; "If a boy with a girl Tarries in a little room, Happy their mating." And so on in its earthy way; I think you get the idea. Ably supported by a boys' choir, the soloists have a field day with lyrics like these.

If you already own EMI's first, full-price CD, this new release may be enough of a sonic improvement to warrant a change; but if you own the "Great Recordings" remastering, you already have the identical copy of this one. The thing is, if you don't already own the recording in any form, you might consider now as good a time as any to invest in it. The only other recordings I can think of that compare with Previn's are Blomstedt's with the San Francisco Symphony (Decca), Ormandy's with the Philadelphia Orchestra (Sony), and Jochum's with the German Opera Orchestra (DG). Yet Previn has the edge in sound.

Email ThisBlogThis!Share to TwitterShare to FacebookShare to Pinterest
Labels: Orff