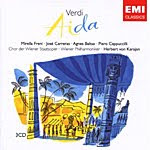 Was there ever a grander grand opera than Verdi's Aida, and have there ever been any grander recordings of it than Karajan's two stereo performances on Decca and EMI? Interestingly, both Decca and EMI chose to reissue their recordings at about the same time a few years ago, and while the earlier Decca interpretation may in some ways be the grander of the two, it's the later, 1979 EMI recording that has the slight sonic advantage.

Some listeners will argue the point. The Decca is also quite fine, and has a marginally better cast. The knock against this EMI version is that Jose Carreras doesn't have a big enough voice for the part of Radames, but it's hard to make that statement after listening to it. In any case, the music dwarfs the singers, and certainly one cannot fault Mirella Freni as the doomed princess Aida or any of the other cast members.

And you can hardly fault the EMI sound, either. It may be a trifle bright (sometimes almost glaring) in the upper registers during big climaxes, which are many, but it is also spectacular in the extreme. Those horns, which sound good in the Decca version as well, sound even more splendid here, their placement in the balconies giving them an extra-resonant dimension.

What did disappoint me, however, is that EMI did not bother to remaster the recording for this latest release. It's the same 1986 digital rendering they've used for three successive CD sets: first at full price and now in a second mid-price box. I would love to have heard what their Abbey Road Technology could have done to smooth out the rough patches.

Another minor annoyance is that EMI chose to repackage the set in a cardboard box, with separate paper sleeves for the three discs, rather than use a double jewel box. I really dislike having to pry discs out of those little sleeves and worry about fingerprints.

A further annoyance is that EMI no longer offer a libretto, just a scene summary. It seems a little chintzy of them. And a last annoyance is that the EMI folks appear to want to advertise the fact that this is a mid-price set by giving it some inexpensive-looking cover art. Inside the set's booklet we find a picture of the original cover art for the LP set, and it is quite rich and striking in appearance. Why not have used that artwork instead of what looks like a cheap pen-and-ink drawing on the current cover? But do they ever ask?