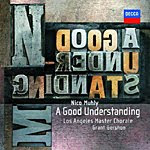 The back-cover blurb describes the pieces on this disc as "contemporary choral classics."  Now, I hate to begin on a negative note, and I mean no disrespect to the musical selections on the album, which are lovely in every regard; but to call them "classics" seems premature. The very term "contemporary classics" seems contradictory to me, a typical stretch of PR hype. Let's wait, say, fifty years and see if people are still listening to and recording this music. Then we'll know if they're "classics" or not. For the present, I'd rather refer to them simply as highly agreeable choral compositions and leave it at that.

The back cover also describes Nico Muhly as "America's leading young composer." Not one of America's leading young composers, but apparently the leading young composer, period. Again, no disrespect to Mr. Muhly, who is surely an excellent composer, but not having heard the work of every other young American composer out there, I couldn't possibly agree that Muhly was the very best of the lot. In any case, he is, as I say, very good, his having started as a boy chorister in the Eighties and going on to pursue music at Columbia University and the Julliard School, studying composition with John Corigliano and Christopher Rouse. Today, he's developed into quite a multitalented composer, working not only in classical music but in pop, rock, and opera.  In the current album, he works with choral settings of mainly spiritual texts.

The program begins with Bright Mass with Canons, a four-section choral work sung in Latin.  It sounds at once familiar, as it should, yet new and fresh and remarkably refreshing for what most listeners will deem "church" music.  I mean, it is a mass, after all.

The next piece, the ambiguously titled First Service, is in two canticles--"Magnifcat" and Nunc dimittis"--and sung in English. It aims to place four-hundred-year-old texts in a modern setting. Just don't expect a modernization to sound like something a rock singer or avant-garde innovator would write. These are still pretty conventional arrangements that do no disservice to the sacred words.

Senex puerum portabat ("The old man bore the child in his arms") is a Christmas anthem, again set to an old text, which begins sweetly enough and then bursts out in jubilation toward the end, finally floating down into gentle repose. It's one of the most-affecting pieces on the program.

The penultimate work, A Good Understanding, which lends its name to the album, is the most boisterous, outgoing work on the disc, with percussion in the forefront and organ and voices taking up the rhythms as the piece proceeds.  It's kind of fun, given the nature of the music.

The program concludes with Muhly's only secular work in the collection, Expecting the Main Things from You. Here, we get the words of American poet Walt Whitman set to music in three parts. It's the longest piece in the set, and, again, while it's probably not as memorable as Whitman's words alone, it does no harm to them, either. Outstanding moments:  wood blocks, Morse code, and the entire third movement.

Decca recorded the album in June, 2010, at the Walt Disney Concert Hall, the audio engineers providing exemplary sound. For the most part, the recording balances the voices well against the organ background, the vocals clear without being too bright or edgy. The organ is deep and solid, and the stereo spread displays plenty of center fill, delivering a room-filling choral/organ/instrumental sound, with vividly articulated percussion and a pleasant ambient bloom to the whole affair.

Email ThisBlogThis!Share to TwitterShare to FacebookShare to Pinterest
Labels: Muhly