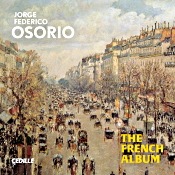 Jorge Federico Osorio may not be the most-familiar name among concert pianists, but he is assuredly among the best. The Mexican-born Osorio (b. 1951) has always avoided the flash and flamboyance of so many of his colleagues in exchange for graceful, refined playing, and it seems to have paid off. He has produced dozens of first-rate record albums of solo, sonata, and concerto music for EMI, Naxos, ASV, Artek, IMP, Linn, CBS, and others, his most-recent recordings on the Cedille label.

This addition of “The French Album” to his discography is a perfect example of his technique. It includes music by Faure, Debussy, Rameau, Chabrier, and Ravel, all of it done up in as gentle yet as passionate a style as one could want. Here’s a rundown of the disc’s contents:

Among the things I’ve written about Osorio in the past apply here. So, to quote myself, he plays with beauty and charm, a delicate touch, and a genuine grace, with expressive, nuanced singing in his piano playing. He is a richly expressive piano virtuoso of international fame, and in my experience has never demonstrated anything but sensitive, immaculate, committed, passionate playing, a most-refined pianist whose best work comes in expressively lyrical passages. In “The French Album” he finds amply opportunity to demonstrate all of those talents, particularly in the “expressively lyrical” material, which comes in abundance from the French masters. 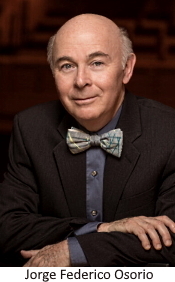 Osorio bookends his program with a pair of pavanes by Faure and Ravel respectively. They are perfect pieces for exemplifying his gentle yet commanding style. A pavane is “a stately dance dating from the 16th century,” and Osorio plays both of them with a stately grace, just as he plays everything on the agenda with a courtly polish.

The Debussy items dominate the album. Osorio gives them a free expression. I read the other day someone expressing the opinion that Debussy ushered in the modern age of classical music, and you’ll get no argument from me. With Debussy’s brilliant tone colors, expressionistic and impressionistic in style, lush and subtle at the same time, he certainly created a new musical world. Osorio exploits this new world superbly, his tone colors nuanced and unmistakable, his touch as delicate as the occasion demands. This is playing one can feel, and it feels good.

As I said at the beginning, there are flashier pianists than Osorio, but there are none finer. In this album of French music, he is in his element. If I were forced to pick a favorite selection, it might be Chabrier’s Habanera, not just because it’s beautiful music, but because it is Spanish-influenced music in the French manner, wonderfully executed by Osorio, who combines the best of both worlds.

Producer James Ginsburg and Cedille’s ace engineer Bill Maylone recorded the music in the Reva and David Logan Center for the Arts at the University of Chicago in January 2020. The sound is gorgeous: not too sharp or bright; not too dull or soft. It simply sounds like a real piano in a real hall setting, with just the right amount of ambient bloom, room acoustics, and lifelike detail to bring it to life.