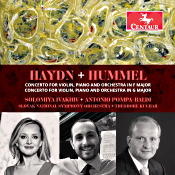 It’s not unusual to find works by Austrian composer Joseph Haydn (1732-1809) and fellow Austrian composer and child piano prodigy Johann Nepomuk Hummel (1778-1837) paired on the same record album. The two were, after all, contemporaries for a while, although Haydn was by far the older man. Hummel was for time a time Haydn’s pupil, and Haydn even wrote a sonata for him to play. But the two pieces often paired are the trumpet concertos they wrote, not, as here, their double concertos for violin, piano, and orchestra.


So the present disc is a sort of novelty, a revealing one, and excellently played by Ukrainian violinist Dr. Solomiya Ivakhiv, Italian pianist Antonio Pompa-Baldi, well-known conductor Theodore Kuchar, and the Slovak National Symphony Orchestra.


The first of the two concertos on the disc is the Concerto for Violin, Piano and Orchestra in F Major, Hob. XVIII:6, written in 1766 by Franz Joseph Haydn. The music sounds about as “classical” as one can imagine, with zippy violin and piano parts and sweet, catchy little tunes. This could be Haydn or Mozart or any of their contemporaries. Except that in the hands of Haydn, there’s never a letdown of sparkling melodies. More important, Ms. Ivakhiv and Mr. Pompa-Baldi perform wonderfully together, their duets a delight in phrasing, nuance, and solidarity. There is absolutely no stuffiness about this playing, just a constant outpouring of joy. Even the central Largo, which might have appeared lethargic in anybody else’s hands, exhibits a radiant beauty. And I suppose a shout-out to Maestro Kuchar is also in order, even though his and his ensemble’s contributions are overshadowed by the soloists. The accompaniment is nothing but gracious and supportive. So, a bit of sometimes overlooked Haydn gets a welcome new realization.


The complementary selection on the program is the Concerto for Violin, Piano and Orchestra in G Major, Op. 17, written around 1805 by Johann Hummel. One can still hear the classical echoes of Haydn in the music, but it has a more voluminous, more mature aspect to it than most earlier, eighteenth-century works. And it’s longer than the Haydn, while neither here nor there a notable feature as concertos and symphonies tended to get lengthier over time. The second-movement theme and variations are a standout and more than ever may remind one of Mozart.


We also find in the Hummel the piano taking a more prominent part in the proceedings, even though the violin still dominates. And we get a more ample sound from the orchestra. However, as with the Haydn we find no lack of clever, ever charming tunes in the Hummel piece, which everyone concerned handles with relish.


Producer and engineer Jaroslav Stranavsky recorded the concertos in Ziliny, Slovakia, November 2017. The most noticeable quality about the sound is its bloom, its prominent yet unobjectionable ambient resonance. It makes the strings and soloists sound big and full and provides an extra luster to the affair. The violin and piano do seem a bit too large and too forward at times, but they are, after all, the stars of the show.


To listen to a brief excerpt from this album, click below: