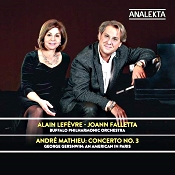 Let's start with a little info about Andre Mathieu, a classical composer and pianist who isn't exactly a household name. First, he was born in Quebec, Canada in 1929 and died unexpectedly young of alcoholism and emotional problems in 1968. Fortunately for us, he left behind a large legacy of music, although most of it remains unrecorded. A check of Amazon reveals only a handful of Mathieu recordings, many of them by the artist represented on this disc, pianist Alain Lefevre. He and conductor Joann Falletta and her Buffalo Philharmonic do a splendid job with the music.

According to Wikipedia, "Mathieu's style leaned towards the late Romantic school of Rachmaninov, and his music was influenced by Debussy as well. Mathieu wrote many works for piano." Here, we find his Concerto No. 3 in C minor for piano and orchestra, which he wrote in 1943 under the titles "Concerto Romantique" or "Concerto de Québec."

The concerto, revised and reorchestrated, is highly reminiscent of Rachmaninov from the very beginning. Dark, almost ominous chords open the music, building to a big, rhapsodic flourish, again evocative of Rachmaninov. So, why didn't Mathieu become anywhere near as popular as his Russian counterpart? I've always thought the popularity of any piece of music with the general public is directly equivalent to how melodious it is and how much exposure it gets. With Mathieu, there is the business of its being somewhat derivative, not as soaringly tuneful, and not as well promoted. Which takes nothing away from Mathieu.

The opening movement is rather scattershot to my ear. It's all over the place with one melody bumping into the next, something perhaps attributable to Mathieu being only in his mid teens when he wrote it. It's a passionate, tempestuous affair, and pianist Lefevre seems to take delight in its impetuous nature. As expected, Ms. Falletta and her Buffalo players support him superbly.

The highlight of the concerto is the second-movement Andante, serene and flowing, if not quite reaching the emotional heights of a Rachmaninov. Still, it's a lovely contribution to the piece, seamlessly interwoven with the faster movements and unaffected in its beauty. In the closing movement, Lefevre and Falletta deliver a jaunty presentation, filled with youthful zeal and playfulness.

Accompanying the Mathieu is a far more-familiar work, George Gershwin's An American in Paris, the jazz-inspired piece the composer wrote in 1928 after spending some time in Paris. In the work's original program notes, Gershwin says "My purpose here is to portray the impression of an American visitor in Paris as he strolls about the city and listens to various street noises and absorbs the French atmosphere." When the music moves into blues, Gershwin tells us "our American friend...has succumbed to a spasm of homesickness." However, "nostalgia is not a fatal disease" and the American visitor "once again is an alert spectator of Parisian life" and by the end "the street noises and French atmosphere are triumphant."

Here, Ms. Falletta and her orchestra take it alone, and they make the most of Gershwin's colorful tone painting. She lends the music a properly joyful, frolicsome atmosphere, combined with an equally appropriate dose of blues when necessary. It's lyrical, jazzy, bluesy, turbulent, and glittering by turns.

Dr. Bernd Gottinger made the recordings live at the Kleinhans Music Hall, Buffalo, NY in February 2017. The sound he obtained is reasonably natural: warm, modestly reverberant, slightly soft, dark, and distant. The piano appears nicely integrated with the orchestra, too; in fact, it remains an almost neutral presence--clear, rich, and resonant, but never completely dominant as it might be if recorded closer. Again, the sound is fairly lifelike, if not as tonally transparent as the best audiophile recordings, accounting perhaps for its being recorded live. I wish they had deleted the applause at the end of the pieces, though.