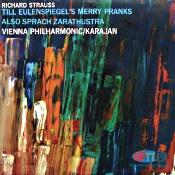 No, you're not experiencing deja vu.

It was only a few weeks before writing this HDTT review of Herbert von Karajan's 1959  Zarathustra recording that I posted a review of Decca's own remastering of the classic. So, it was informative for me to compare the two versions: Decca's "Legends" release from 2000, supposedly using the original master tape, and the newer release from HDTT (High Definition Tape Transfers), transferred from a 2-track 15-ips tape.

But first, a note about the recording, which is, indeed, a classic. German composer Richard Strauss wrote his lengthy tone poem Also sprach Zarathustra in 1896, inspired by philosopher Friedrich Nietzsche's novel. But it was probably director Stanley Kubrick's 2001: A Space Odyssey that really made it famous more than anything else. Well, at least it made the Prelude famous, which Kubrick employed several times in the film. It gained instant recognition, and it was Karajan's '59 recording that Kubrick used. In fact, the tone poem became so famous thanks to Kubrick that a joke arose about how you can always tell an audiophile because he only plays the Zarathustra Prelude.

Anyway, the performance is pure Karajan: grand, imposing, sensual, romantic, luxuriant, with the playing of Vienna Philharmonic always full and rich. Of course, everyone has personal preferences, and of the conductor's three stereo versions of Zarathustra, the second (DG) seems to me more luminous than this earlier one, if not, as I say, better known. Anyway, this is the one most people probably know, so it's good enough reason to find it remastered again.

Incidentally, the MGM soundtrack from Kubrick's movie caused a bit of a stir about which recording the director actually used. As recounted on IMDb, the Internet Movie Database, here's the explanation the recording's producer, John Culshaw, gave to help clear up the controversy:

"The end music credits do not list a conductor and orchestra for Also Sprach Zarathustra. Stanley Kubrick wanted the Herbert von Karajan/Vienna Philharmonic version on English Decca for the film's soundtrack, but Decca executives did not want their recording 'cheapened' by association with the movie, and so gave permission on the condition that the conductor and orchestra were not named. After the movie's successful release, Decca tried to rectify its blunder by rereleasing the recording with an 'As Heard in 2001' flag printed on the album cover. In the meantime, MGM released the 'official soundtrack' LP with Karl Bohm's Berlin Philharmonic Also Sprach Zarathustra discreetly substituting for von Karajan's version."

John Culshaw and engineer James Brown made the Zarathustra recording in the Sofiensaal, Vienna. They framed the sound as carefully as always, Culshaw making the Karajan disc just after he had done the same for Georg Solti's Wagner Ring cycle. The producer brought the same meticulous expertise to the production as always, creating an expansive sonic picture that for quite a while remained an audiophile demo piece.

While I had always found the sound a bit hard in its vinyl and early CD forms, Decca's 2000 "Legends" remaster came off more comfortably than before. The sound was smoother and slightly warmer, with a little softer an image, yet one that contrasted more than ever with its discernibly rough, noisy background. I still did not find it entirely satisfactory in another way, too, because it seemed to lack the life and dynamism I remembered from the earlier vinyl and CD editions.

Now, the folks at HDTT have remastered it (2017), and we have something much closer to my recollection of the original LP. In the HDTT product we find most of my objections to the Decca remastering largely improved. The HDTT aural picture is not quite so smooth as Decca's, but it sounds wider, deeper, and more detailed, with even greater dynamic impact. What's more, it appears quieter, too. In short, if you prefer Karajan's 1959 version of the music to those by Reiner, Haitink, Mehta, Kempe, and others, this HDTT transfer is no doubt the best you'll find it on compact disc.

Decca included several couplings on their "Legends" disc, but HDTT include only Till Eulenspiegel's Merry Pranks. Producer Erik Smith and engineer James Brown recorded it a year after Zarathustra with the same orchestra and location. Karajan and the VPO have fun with the merry prankster, and the sound is much the same as the recording of the year before: full, wide, dynamic, and detailed.