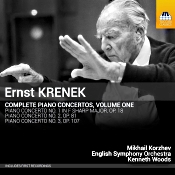 Here's another composer you may not know. Or maybe you do because the Austrian-born American composer and writer Ernst Krenek (1900-1991) does have several dozen albums to his credit. However, even more than his music, he may have been famous for his short-lived marriage to Anna Mahler, the daughter of Gustav Mahler; who knows. He earned a living largely by teaching, lecturing, and completing the unfinished material of other composers, despite his writing over 240 of his own works. Whatever, the conductor and cellist Kenneth Woods has taken up Krenek's cause, and perhaps he will help revitalize the composer's name as he did with his recordings of Austrian-British composer Hans Gal several years earlier. This time, Maestro Woods is working with pianist Mikhail Korzhev and the English Symphony Orchestra, of which Woods has been Principal Conductor since 2013.

Throughout his career, Ernst Krenek adopted a variety of compositional forms, from late-Romantic to modern atonality, from neoclassicism to experimental jazz, and from modal counterpoint to twelve-tone writing, serial techniques, and electronic music, making him truly a man for all seasons. I wonder, however, if he had settled down to one particular style, if people would have better appreciated his music today? Again, who knows. As an example of how little audiences know Krenek's concertos, the first two of the concertos on the present disc receive their premiere recordings.

Anyway, the album offers what the folks at Toccata Classics say are the "complete piano concertos," Nos. 1-3, written between 1923 and 1946, even though most of the on-line references I consulted list a fourth concerto as well. Apparently, the fourth of the concertos will appear on a second volume. Whatever, the program presents the first three concertos in chronological order, starting with the Piano Concerto No. 1 in F sharp major, Op. 18 (1923). It's the most conventional in style, a sort of quasi-Romantic piece.

The opening movement is securely in the late-Romantic tradition, with traces of a Debussy-like dreaminess about it. The second movement is more rhythmic, more pulsating, more radiant. By the third movement, the piece is back to a sweet, comforting mode, and then the finale provides a fairly rollicking, easily communicative close.

I'm not sure how one should perform the music, my never having heard it before, but I can't imagine anyone doing it any better than this. Korzhev's piano playing is scintillating, Woods's direction is warmly encouraging, and the orchestra is uniformly precise, together giving the score all the interpretive support it could ask for. It's hard to imagine any other pianist, conductor, or orchestra doing anything more for Krenek's work.

Next is the Piano Concerto No. 2, Op. 81 (1937), in which Krenek employed a twelve-tone technique. The result is a darker, more dissonant piece, one that pianist Korzhev says contains both "nostalgic longing for the 'old world'" (Krenek wrote it just before he fled Austria for America) and "dreadful premonitions" (presumably of World War II and its catastrophic effects on the world). After that, we get the little Piano Concerto No. 3, Op. 107 (1946), which sounds the most rambunctious, the most overtly flamboyant of the lot, with the piano waging more obvious contests with the various sections of the orchestra.

The Second and Third Concertos are distinctly different from the First, yet Korzhev, Woods, and company present them in an easily accessible manner. This is modern music for people who don't usually like the dissonances and peculiarities of much modern music. The extravagance of the Third Concerto sounds particularly appealing in contrast to the relative serenity of the First. The diversity of the three works goes a long way toward illustrating the composer's musical evolution.

Producer Michael Haas and engineer Ben Connellan recorded the music at Wyastone Concert Hall, Wyastone Leys, Monmouth, Wales in September 2015. From the quiet opening notes to the loudest crescendos, the sound appears smooth, well focused, dynamic, broad, and well extended. The sense of the hall around the orchestra and piano is especially welcome, as the hall's warm, mildly reverberant acoustic contributes strongly to the disc's overall realistic effect. The engineer always keeps the piano well integrated with the orchestra, too: just slightly forward of the other players but not in your face. What's more, there is a genuine sense of depth to the ensemble, giving the whole affair a most-natural perspective.

Email ThisBlogThis!Share to TwitterShare to FacebookShare to Pinterest
Labels: Krenek