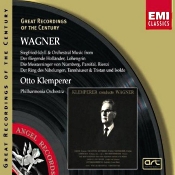 It should be no secret by now that I love some of the older conductors who were fortunate to live long enough to record a few things in stereo. Among my favorites are Fritz Reiner, whose RCA Living Stereo releases continue to thrill me; Bruno Walter, Leopold Stokowski, Sir John Barbirolli, and the subject of this review, Otto Klemperer, whose recordings from the late Fifties, Sixties, and early Seventies are still amazing, both interpretively and sonically. Unlike so many of today's rather conservative conductors, whose music-making can sound identical to everyone else's, people like Reiner and Klemperer put their individual stamp on their performances without greatly distorting the composer's intentions. It is a talent that only a few musicians possess.

In 2002 EMI compiled and released the two-disc collection of Wagner orchestral music under review, assembling the set from several of Klemperer's albums recorded between 1960 and 1963 with the Philharmonia Orchestra at their peak. The man brought to all of his music a heroic feeling of granite construction, every work a towering monument. And what better music is served by this approach than Wagner's, which is towering in every respect. Not that Klemperer couldn't be playful and lighthearted, too, taking his Mendelssohn and Haydn as examples. But it was in Beethoven, Brahms, Mahler, and Wagner that people know him best today. This Wagner collection, now reissued by Warner Classics, is second to none.

Klemperer often had a way of making any music seem bigger or more massive than we usually hear it, and with Wagner it works especially well, where everything seems of a piece. The Rienzi overture that opens the set, for example, is beautifully controlled, solidly assembled, yet affectionately dashing. The Tannhauser overture that follows is my favorite performance of this music, bar none, an ethereal presentation of immense feeling. Likewise effective are Klemperer's admittedly idiosyncratic but always appropriate interpretations of overtures and preludes from Lohengrin, Die Meistersinger, Der fliegende Hollander, Tristan und Isolde, and Parsifal, plus the Siegfried Idyll and excerpts from Das Rheingold, Die Walkure, Siegfried, and Gotterdammerung. Every track, all sixteen of them, is top-flight.

I'm not sure if there is any music I own that I have had on so many different discs as this Klemperer Wagner music. First, I owned the LPs. Then I bought the EMI Studio CD's; then the EMI Klemperer Legacy CD's; then these "Great Recordings of the Century" discs; and presently the same set remastered by Toshiba-EMI, Japan. With each new set, the music seems to sound better, although to be fair, I believe these "Great Recordings of the Century" are the same ART (Abbey Road Technology) masterings that appeared on the Legacy discs. In any case, the sound is excellent: full, wide ranging, with a small degree of background hiss if listened to at high volume. Although they don't always provide the ultimate in transparency, they display a good degree of realistic imaging.

Whatever the case, I could not recommend any Wagner orchestral music more strongly.