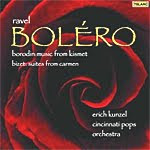 I read someplace that Erich Kunzel was the number-one most-recorded conductor in the world. And that was, like, ten or fifteen years ago! Today, he's undoubtedly got as many Telarc recordings to his credit as most conductors have compiled in a lifetime. The back page of the disc's booklet insert lists Kunzel's Telarc recordings, and you have to use a magnifying glass to read them all.

This latest release is "Bolero," a disc dedicated to the music of exotic lands. It starts with Ravel's celebrated piece, yet it is the least-effective reading on the album.  Ravel once said that his Bolero should take about seventeen minutes to get through; Kunzel does it up in just over thirteen minutes. I have to admit that in Kunzel's last few Telarc recordings with the Cincinnati Pops, he seemed less than animated, but I wasn't expecting him to fly through the Bolero quite so quickly. It may sound a bit more exhilarating than most other interpretations, but it robs the music of its sensual qualities. Plus, there was one moment in it that made me laugh out loud, something I doubt Ravel intended.

Next, Kunzel does a medley of excerpts from the music of Alexander Borodin, music which the album proudly announces as "popularized in Kismet." I'm not sure if Telarc or Kunzel realize that most listeners today probably no more recognize this fifty-odd-year-old musical than they recognize the name Borodin itself. In any case, we get passages from the Symphony No. 2, "In the Steppes of Central Asia," the String Quartet No. 2, the Symphony No. 1, and the Overture and "Polovtsean Dances" from Prince Igor. Kunzel handles them in his usual perfunctory style.

The best section of the album, however, is devoted to the music of Georges Bizet's Carmen, the Suites Nos. 1 and 2, which come off quite well--dramatic and voluptuous, exciting and sensitive in all the right places. You might want to consider the disc for these two suites alone. Then things finish up with Isaac Albeniz's "Fete-dieu a Seville" from Iberia, which seems a bit anticlimactic after the Carmen music, but it's OK.

Telarc's sound is quite good. It is especially impressive in its spatiality, naturalness, and ultra smoothness. I thought the top end seemed a little recessed, though, especially compared to a number of other recordings to which I compared it. So don't expect too much glamor in the highs, just a sweet sonic realism throughout the rest of the range.