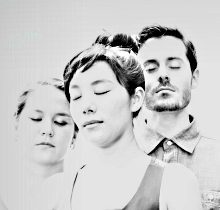 Of the program, Longleash explains, "This concert marks the 250th anniversary of Beethoven's birth, offering an opportunity to take stock of our current artistic, cultural, and political moment through a consideration of Beethoven as an evolving cultural symbol. In 1970, celebrations of Beethoven's bicentennial were heavily shaped by the political turmoil, cultural upheaval, and tragic injustices of the time. Commissioned responses from that year by composers such as Mauricio Kagel and Karlheinz Stockhausen illustrated the weight of Beethoven's cultural associations. In this new program, we seek to further explore the question of what it means to celebrate Beethoven in an equally tempestuous moment in time."

YPC was thrilled to be featured on yesterday's CBS Sunday Morning, which treated over five million TV viewers to a six-minute news feature covering the breadth of YPC's programming, along with comments and music from YPC singers.  The report demonstrated not only the impact of the program on the singers, but the joy they continue to spread throughout the holidays and beyond. Watch the full video here: https://ypc.org/cbs-sunday-morning/

Mired in decadence and shrouded in subtlety, French court culture found no better expression than the intimate, sensual, and seductively nuanced Air de Cour. Yet, at the apex of the Ancien Régime, Bon–Goût tangles with Sprezzatura, as a Mazarin Italian import and Tuscan peasant's son becomes "Surintendant de la Musique du Roi." The monumental Tragédie Lyrique and the Comédie-Ballet of Jean Baptiste Lully, né Giovanni Battista Lulli, gradually eclipse the Air de Cour, as a glittering age hungry for spectacle swiftly hurdles towards its end.

Join us on a midwinter's evening, as the French-Florentine duo of mezzo-soprano Lila Hajosi and lutenist Giovanni Bellini share a program of exquisite jewels from the rise of the Roi Soleil in the elegant and intimate Ridotto of the townhouse of NYU Casa Italiana Zerilli-Marimò.

New Century Presents "Beethoven in the Presidio"
Music Director Daniel Hope and New Century Chamber Orchestra join the global celebrations of Beethoven's 250th birthday with "Beethoven in the Presidio," a special two-day event at the newly-renovated Presidio Theatre in San Francisco. Recently appointed as the President of the Beethoven-Haus Bonn in Germany, Daniel Hope welcomes Simone Dinnerstein for her second appearance as artist-in-residence and Grammy Award-winning cellist Lynn Harrell for two unique programs.

That same weekend, Daniel Hope and New Century will present a concert entitled "Refuge in Music" on Sunday, January 26 at 3:30 p.m. at the Osher Marin Jewish Community Center in San Rafael as part of Music at Kohl Mansion's eight-week residency of "Violins of Hope," a rare collection of restored Holocaust-era string instruments. Performing on a selection of instruments from the collection, New Century will present music by Jewish composers that suffered and perished at the Nazi concentration camp Terezín in a program that also features exclusive footage from Daniel Hope's award-winning 2013 documentary "Refuge in Music: Terezín/Theresienstadt."