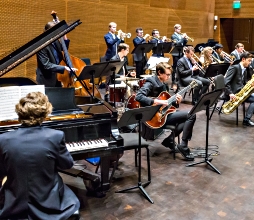 "This year's Jazz at Princeton program is going to be extraordinary," says Mahanthappa. "With the contribution of so many of jazz's most articulate voices – both as guest artists and ensemble leaders – we are thrilled to offer performances that will engage, inspire and entertain students, educators and the community at large.  I am also excited that we'll be hosting our first outdoor jazz festival."

Tickets are $15 General/$5 Students, available online at princetonuniversityconcerts.org, by phone at 609-258-9220, or in person two hours prior to the concert at Richardson Auditorium.

The concert features mezzo-soprano Barbara Dever and the Musica Viva NY Choir led by Artistic Director Alejandro Hernandez Valdez performing works by composers directly affected by World War I, including Ravel's Le Tombeau de Couperin and Holst's Ode to Death. Also on the program is a NY premiere for choir and chamber orchestra based on texts by World War I poets composed by Joseph Turrin, co-commissioned by Musica Viva NY, the New Orchestra of Washington, and the Washington Master Chorale.

Tickets, priced at $40, are available by visiting musicaviva.org/tickets or can be purchased at the door. For discounted pricing, please visit musicaviva.org for details.

NYFOS Opens 2018-19 Season with Celebration of W.C. Handy and the Birth of the Blues
New York Festival of Song--the "engaging, ever-curious series" (The New York Times)--opens its 2018-2019 season by delving into the world of W. C. Handy, often referred to as the "Father of the Blues," and his vast influence as a prominent African-American composer and publisher in the early 20th century.

Tickets will be free, part of OSO's "Opera Free For All" initiative, though the company asks that all attendees bring a small donation of non-perishable food items, to be given to the Holy Apostles Soup Kitchen.

"Vocal Currents: Music in our Changing World" reimagines and redefines today's music by bringing YPC's young singers together with composers to create the music of tomorrow. Tickets on sale now at KaufmanMusicCenter.org: $25 general admission | $15 students.

As a U.S. citizen and a British subject, Jeremy is uniquely placed to lead the finest professional choir of men and boys in North America, whose life owes much to the great English choral tradition since T. Tertius Noble was invited to found the Saint Thomas Choir School in 1919.

"I am very excited to welcome Jeremy to join a hard-working team at Saint Thomas Church and to build on the great legacy of his predecessors.  Jeremy not only has an international reputation on the organ, but is also passionate about music changing peoples' lives, and I know how much he is looking forward to leading our Choir as its unique Choir School celebrates the centenary of its founding," said the Rector, Canon Carl Turner.

WMI Presents NY Debut of Balkan/Classical Duo Aritmia
World Music Institute presents two celebrated instrumentalists who ruminate on their common roots and love of traditional Balkan and classical music with original works and arrangements of Erik Satie, Manuel de Falla, and the mournful music of sevdah—sometimes called 'Bosnian blues.' Known for their sheer virtuosity combined with a blend of improvisation and jazz with their sound, they are able to create powerful, distinct sound-worlds through their own compositions as well as their own arrangements of folk and classical works.

Bosnian-born Merima Kljuco is one of the world's finest concert accordionists. She is a frequent guest soloist with orchestras including the Scottish Chamber Orchestra, Netherlands Radio Philharmonic Orchestra and Holland Symphonia, and has worked with internationally renowned artists and ensembles such as Theodore Bikel, MusikFabrik and the Schönberg Ensemble.

An acclaimed guitarist of Bosnian, Serbian and Croatian origins, Miroslav Tadic has performed and recorded with luminaries such as Terry Riley, Plácido Domingo, Wadada Leo Smith, the London Symphony Orchestra and the Philharmonic Orchestra of Monte-Carlo. He has also recorded duo albums with such luminaries as guitarists Vlatko Stefanovski, Dusan Bogdanovic, vocalists Teofilovic brothers, and saxophonist Peter Epstein, and he is on the faculty of the Herb Alpert School of Music at CalArts.

Meet the Juilliard Grads in "Vivaldi the Teacher"
Meet the Future of Period Perfomance!

November 7-11, Philharmonia Baroque Orchestra welcomes three recent graduates of the Historical Performance program at The Juilliard School. Violinist Alana Youssefian (Class of 2018), oboist David Dickey (Class of 2016) and cellist Keiran Campbell (Class of 2017) have all been instructed by PBO musicians during their studies. Now, they are coming to PBO to reunite with their former teachers Elizabeth Blumenstock, Gonzalo X. Ruiz and Phoebe Carrai to perform Vivaldi double concerti in "Vivaldi the Teacher."

PBO is pleased to introduce you to our November Guest Artists in the following videos.

The young guitarist spent six months touring the U.S. in 2016-17, playing over 50 dates across the country while witnessing a period of profound social and political change.