Concerts at Saint Thomas Presents a Pair of October 2018 Performances 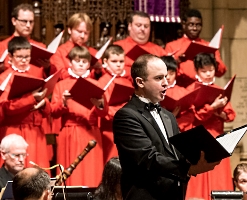 The 2018-19 season at Concerts at Saint Thomas will begin with a major dedicatory event centered around the inauguration of the church's new Miller-Scott Organ. After over ten years of planning, this magnificent organ will be debuted by Saint Thomas's current Organist and Director of Music, Daniel Hyde, in a special solo recital on October 5th officially dedicating the instrument to the church's former music director, John Scott. A virtuosic program has been planned with the intent of showcasing the instrument's full sonic capabilities ranging from soft string voices to the iconic "blazing Saint Thomas sound."

On October 18th, Benjamin Sheen plays the organ for its first concert with the Saint Thomas Choir of Men and Boys, and its orchestral debut with the Orchestra of St. Luke's.

Video of the The Miller-Scott Organ, Saint Thomas Church:
https://www.youtube.com/watch?v=56v_wz35mcI&feature=youtu.be

Engagements this autumn include residencies at Depauw University, University of North Texas, Cornell University, and University of Michigan; a concert at the 2018 Resonant Bodies Festival at Roulette Intermedium; performances of Nathan Davis and Phyllis Chen's In Plain Air at Christ Church Neighborhood House in Philadelphia, part of the Philly Fringe Festival; the New York premiere performances of Missy Mazzoli's opera Proving Up at Miller Theatre; the politically themed program, the national anthems, with The Crossing at Peak Performances; a performance with Hidejiro Honjo at the Japan Society; a concert at the Rubin Institute for Music Criticism at the San Francisco Conservatory of Music; 100 for 100: Musical Decades of Freedom with the Polskie Wydawnictwo Muzyczne and Polish Cultural Institute New York at Roulette; a Miller Theatre Composer Portrait of Du Yun; and a return to Constellation in Chicago.

For more specific information about the upcoming season, visit https://www.iceorg.org/

Czech Star Violinist Pavel Sporcl Receives "Torch-Bearer Award" in NYC
The award is given to people who outstandingly serve their cities, communities, and countries; Sporcl is a rare musician recipient for a prize that often focuses on sports rather than arts.

Superstar Czech violinist Pavel Sporcl is in New York to receive a special prize for his work bringing society together through music. The prize, called the "Torch-Bearer Award," was presented outside the United Nations building this past weekend by the Sri Chimnoy Oneness-Home Peace Run, a nonprofit institute whose other activities include an international run in which a torch is passed from person to person to encourage people to express their hopes and dreams for a better world. The award "honours those people whose who have inspired and served their nations, their cities and their communities." It was presented in front of fellow luminaries and UN national delegates.

Five Boroughs Music Festival Presents Violin and Guitar Duo
Five Boroughs Music Festival (5BMF) opens its 2018-19 season with a performance by duo Fire & Grace, featuring guitarist William Coulter and violinist Edwin Huizinga. Fire & Grace's programs explore the connective musical elements of classical, folk, and contemporary traditions from around the world, showcased through the duo's own arrangements. Concerts are held on Thursday, September 27, 2018 at 7:30 p.m. at An Beal Bocht Café in Riverdale in collaboration with ClassicalCafé, with additional performances on Friday, September 28, 2018 at 7:00 p.m. at Rockwood Music Hall, Stage 3 in Manhattan, and on Sunday, September 30, 2018 at 3:00 p.m. at Alice Austen House in Staten Island.

Additional 5BMF performances in the 2018-19 season include An Empire of Silver & Gold: Music of 18th Century Latin America, an exploration of 18th century vocal and instrumental pieces from Latin American manuscript sources on November 5; the return of baroque virtuosi, Les Délices, in a new program entitled "Songs Without Words" on February 23 & 24; the award-winning all female Aizuri Quartet on March 22; a collaboration with pianist Martin Katz and the Brooklyn Art Song Society in "Hugo Wolf: The Complete Mörike-Lieder" on April 28, May 3 and 4; and concludes with two special programs celebrating LGBT composers and librettists in collaboration with the New York Festival of Song and the LGBT Community Center ("The Center") on June 11 and 25.

There will be a pre-concert talk at 4pm at All Souls Church, open to all, given by Professor Peter Schickele. Admission is free, with a suggested donation at the door to support Musica Viva NY's artistic programming.

Additional concerts in Musica Viva NY's 2018-19 season include End of the War to End All Wars on Sunday, November 11, 2018 at All Souls Church, commemorating the end of World War I; Musica Viva NY Presents the Aeolus Quartet on Sunday, January 27, 2019 at Bohemian National Hall; "Bernstein at 100" on Sunday, March 10, 2019 celebrating Bernstein's centennial; and Homage on Sunday, May 19, 2019 spotlighting composers paying tribute to the past masters who inspired them.

In addition, the duo will give a master class, free and open to the public, Saturday, October 27 from 10 a.m. to 1 p.m. at Nichols Concert Hall.