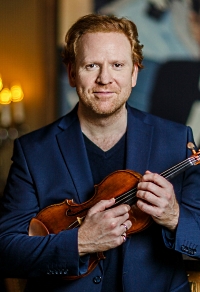 Music Director Daniel Hope and New Century Chamber Orchestra announces its 2018-2019 season including four subscription weeks in venues across the San Francisco Bay Area and a debut European tour of Germany and Poland.

"I am thrilled to be leading New Century as Music Director and can't wait to build upon the many successes that we have enjoyed together so far," said Daniel Hope. "This orchestra has achieved many significant milestones in its 26 year history and thoroughly deserves its reputation as one of the finest chamber orchestras in the world."

The pipe organ is one of the oldest instruments in the Western musical tradition. In the 19th century, before the advent of recording technology, transcriptions for organ of symphonic and opera works became a popular way for people to hear the masterworks of the repertoire – every area had a church with an organ.

Zukerman Receives Dushkin Award at Music Institute's Anniversary Gala
The Music Institute of Chicago, one of the nation's oldest, largest, and most distinguished community music schools, welcomed 300 guests to its 2018 Anniversary Gala on Monday, May 21 at the Fairmont Hotel Chicago. The event raised more than $715,000 from a combination of table sponsorships, ticket sales, and outright contributions.

The evening included a cocktail reception, followed by an elegant dinner and awards presentation. Musical performances took place throughout the evening, representing every area of the Music Institute. Highlights included young musicians from the Community Music School; award-winning students from the renowned Academy, a training center for gifted pre-college musicians; and young students from its outreach programs, including ArtsLink, an arts integration program offered in partnership with Chicago Public Schools, and Third Coast Suzuki Strings, a violin program on Chicago's Northwest Side in collaboration with the YMCA of Metro Chicago.

The prestigious Dushkin Award, established 30 years ago and named for the Music Institute's visionary founders, Dorothy and David Dushkin, recognizes international luminaries in the world of music for their contributions to the art form, as well as to the education of youth. This year's recipient, Pinchas Zukerman, has remained a phenomenon in the world of classical music for more than four decades.

The Montreal-born conductor, hailed by the Financial Times as the "greatest generator of energy on the international podium," will record a broad range of symphonic and operatic repertoire under the label as part of his work as Music Director of The Philadelphia Orchestra, the Metropolitan Opera of New York, the Orchestre Métropolitain de Montréal, and as an Honorary Member of the Chamber Orchestra of Europe (COE). The contract was signed in Hamburg on May 30 2018, during Nézet-Seeguin's nine-city tour of Europe and Israel with The Philadelphia Orchestra.

Miami Music Festival Summer Program Lineup
Miami Music Festival (MFF), an intensive training program for the next generation of classical musicians, announces the lineup for the 2018 season from June 5 through July 29, 2018 at various venues in Miami. In its fifth season, MMF will host young artists from around the world selected from top conservatories and universities.

This year, 250 students from over 25 countries will receive instruction from an assembly of world-class faculty while the community benefits from accessible public concerts featuring many of the industry's most talented artists.

This season will include musical milestones such as the return of MMF's POPS Concert and Independence Day Celebration after a successful first year, and the directorial debut of Antoine Wagner-great grandson of famed German composer Richard Wagner- as the MMF's critically acclaimed Wagner Institute stages complete Acts from Lohengrin and Die Walküre.

New England Conservatory's Children's Choruses: Three Choirs to Perform in Jordan Hall
Children's choirs are woven through the 150-year history of New England Conservatory. Two years after Eben Tourjée opened NEC, famous bandleader, Patrick Gilmore (he penned "When Johnny Comes Marching Home") conceived the idea of a "Great Peace Jubilee." He asked Tourjée to organize and train 20,000 chorus members and an orchestra of 2,000. Many children participated in the chorus from all over the United States. The coliseum built in 1872 for the Jubilee was situated on what is now the Copley Plaza Hotel. It covered four and a half acres, seated 50,000 people, and contained the world's largest organ.

Continuing the tradition of children's choir, New England Conservatory presents an afternoon of delightful choral music with its Preparatory Chorus, Children's Chorus and Chamber Chorus. The afternoon will be conducted by Carey Shunskis, who also curated the program. Studies show there are many benefits for children who sing in groups, including positive social, community, and academic development.

Couldn't make it to the End of Year Recital? You can view each performance on the FAYM Youtube channel. Find the links here: http://thefaym.org/june-2018-newsletter/

The performances feature works that engage with such topics as immigration, inclusion, and national identity, including world premieres of Paola Prestini's The Glass Box (YPC and Yale Choral Artists co-commission; to be performed June 16 and 18) and Arturo O'Farrill's Borderless (YPC commission; to be performed June 18), as well as works by Dominick DiOrio, Michael Gordon, David Lang, and YPC Founder and Artistic Director Francisco J. Núñez, among others. The two choirs sing separately as well as together, and both Mr. Núñez and Yale Choral Artists Director Jeffrey Douma conduct. The performance in New Haven is programmed within the Yale International Choral Festival, which is part of the International Festival of Arts & Ideas.