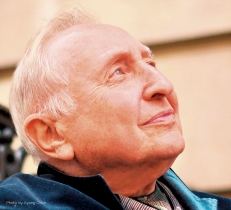 The concert is free, with a suggested donation at the door.

In his first season as Artistic Partner of New Century, Daniel Hope brings the Zurich Chamber Orchestra, with whom he also serves as Music Director, for the opening performance of its 2018 United States Tour. Both ensembles will be highlighted separately in a selection of works from the chamber orchestra repertoire including Bartók's Romanian Dances, Mozart's Divertimento in F Major, K. 138 and Summer 3 from Max Richter's Recomposed: Vivaldi - The Four Seasons. The evening will conclude with both orchestras combining forces for Grieg's Holberg Suite.

Immediately following the concert, New Century will host its 2018 annual gala in the Green Room at Herbst Theatre with proceeds benefiting the organization's education and artistic programs.

Concerts at ASPECT Foundation for Music & Arts
Praised by Epoch Times as "a very welcome addition to the chamber music landscape of New York, the Aspect Foundation for Music & Arts eagerly presents the latter half of its second New York City season, with illuminating performances, underscoring a different thematic concept each evening. With appearances by many of the most prominent performers and musical scholars of today, the Aspect Foundation has quickly become a favorite series among New York's classical concert-goers. The Foundation is housed by the elegant Italian Academy at Columbia University, further instilling Aspect's core sentiments of curiosity, intellectualism, and deriving pleasure from art.

Internationally-recognized pianist and member of the revered Silk Road Ensemble Joel Fan thrills with a blend of canonical and contemporary music. Principal oboist for the London Symphony Orchestra, Olivier Stankiewicz, finds expressiveness in his passion for experimental new music and timeless symphonic traditions. Ashley Bathgate concentrates on the power of a solitary instrument in the concert hall, performing a reinterpretation of Bach's cello suites by composer/collective Sleeping Giant. In a decided departure, the Jon Stickley Trio grooves things up with thumping melodies and harmonies, blending gypsy jazz, bluegrass, and hip-hop with guitar, violin, and drums.

The small audience and musicians are enclosed in an intimate onstage set, as the opera, performed almost entirely in whispers, explores the question: "What if a piece were so quiet and so personal to the performers that you needed to be right next them or you would hear almost nothing?" With direction and design by Jim Findlay, the whisper opera features sopranos Tony Arnold and Alice Teyssier and ICE musicians Kivie Cahn-Lipman (cello), Claire Chase (flute), Ross Karre (percussion), Joshua Rubin (clarinet). the whisper opera was premiered in NYC with one performance at Lincoln Center's 2013 Mostly Mozart Festival, and since toured across the US and Europe.

Foundation to Assist Young Musicians
After 10 years, FAYM is still going strong. At our most recent board meeting we looked back at where we have been and began long term planning with hopes to make the next 10 years even better than the first.

FAYM began with an idea from Mr. Harold Weller, and thanks to the help of many individuals along the way has grown. I especially want to draw attention to our board and all they have done to make that growth possible. Our board members come from different backgrounds and professions that come together for one reason: to bring music education to young people.

None of us are interested in personal fame or fortune. We are only trying to make a difference in the lives of others. I frequently quote the African proverb, "It takes a village to raise a child". The FAYM village could not exist without the leadership of our board members.

Every month, the board gathers to share ideas and make plans to improve and expand FAYM programs, all in the hope that we are creating a legacy for young people yet to come. We share the dream that this program will continue long after we are gone!

We put in a lot of time, effort, and financial support to keep FAYM going strong. At this time I would like to thank Board Members past, present, and future who have share this mission and work hard to bring it to fruition.

Last Day of Spring Classes
May 9th and 10th