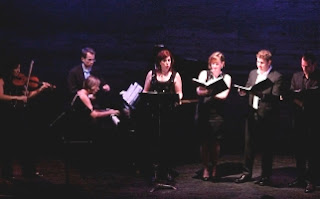 The second volume builds on the success of the initial Five Borough Songbook, which was developed during 5BMF's fifth anniversary season, and also featured twenty commissions from twenty different composers that were presented in concerts in all five boroughs, and preserved as a two-disc recording that topped the Billboard classical charts.

Both concerts on February 11th and 12th are preceded by a one-hour "Composer Chat" featuring Songbook creators. Future performances of the Five Borough Songbook, Volume II will be held in The Bronx, Brooklyn, and Staten Island throughout 2017, with concert dates and locations to be announced.

Tickets: $40 for VIP, $30 for general admission, $20 for students and seniors, available at www.5bmf.org

Salon/Sanctuary Concerts: "Of Meistersingers and Mizmorim"
The art world has always been a bastion of globalism, with artists constantly borrowing from one another to create new, previously inconceivable works. In our increasingly anti-globalist, anti-immigrant time, it is important to remember that many of the artistic works that we hold dear would not have been possible without centuries of cultural exchange.

Few people know about the art world's multicultural debt more than Jessica Gould, the Artistic Director and Founder of Salon/Sanctuary Concerts. Salon/Sanctuary is a concert series that presents "early music in intimate venues which complement both the acoustic and the historical context of the repertoire" in order to "encourage understanding among people of different faiths." I recently spoke with Ms. Gould over the phone about Salon/Sanctuary Concerts' 2016-2017 season, "On the Margins," which explores the musical and historical world of exile. Our discussion focused primarily on the next installment in the series, "Of Meistersingers and Mizmorim: The Wandering Troubador, The Origins of Klezmer, and the Medieval Roots of Wagnerian Fantasy."

It's not a connection that most people would make, certainly, which is one of the reasons why I did this. Most of my motivation when programming is to draw attention to less explored avenues of music history--to use music as a window on history. This program doesn't say that there is a parallel between Wagner and the origins of Klezmer (which are in the Middle Ages). Rather, it points out the flaw in the Wagnerian mythology, that there was somehow a racial purity in the Middle Ages, an idea cherished by the Nazi party in the 30s. In reality, it was anything but "pure." It was a mishmash throughout Europe--there were wandering troubadours from France, Yiddish civilization was spread far and wide, and Poland became a refuge for many victims of expulsions throughout Europe.

For more than 75 years, the Vienna Philharmonic has ushered in the New Year with the light and lively, quintessentially Austrian music of Johann Strauss, his family, and their contemporaries, performed at Vienna's Musikverein. Since 1987, the concert has featured a different conductor each year, and this year Mr. Dudamel, 35, will be the youngest-ever to lead the popular and festive New Year's concert. The Vienna Philharmonic's New Year's Day concert is broadcast in over 90 countries and will have an estimated 50 million television viewers, making it the largest worldwide event in classical music.

Among traditional waltzes, polkas and other works, Mr. Dudamel will conduct Strauss's famous "Blue Danube" Waltz on the occasion of the work's 150th anniversary, and pieces by Otto Nicolai, founder of the Vienna Philharmonic. Host Julie Andrews will also take the viewer to picturesque Viennese landmarks, including Otto Nicolai's study in the Haus der Musik, and will join Mr. Dudamel in visiting the student musicians of Superar, the Sistema organization for Central Europe. Mr. Dudamel was famously a product of the Sistema program in his native Venezuela, and this broadcast will offer a special look at these talented musicians of tomorrow.