ABS Presents Handel's Parnasso in festa - First Ever Outside Europe 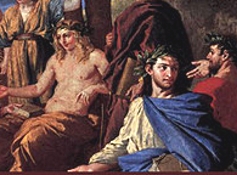 To celebrate the marriage of Princess Anne to Prince William of Orange, Handel composed a new 3-act serenata, Parnasso in festa, and utilized his greatest singers for the work, including the celebrated castrati Giovanni Carestini and Carlo Scalzi, and two of his most illustrious sopranos, Margherita Durastanti and Anna Strada del Pò.

The glorious music of Parnasso in festa was such a popular success at the 1734 Royal Wedding that it was profitably revived during several subsequent opera seasons at London's Covent Garden.

Presented only occasionally in England and Germany since Handel's day, this work of stunning melodies and irresistible charm will receive its long overdue American premiere during the 2016 American Bach Soloists Festival & Academy under the direction of Artistic & Music Director Jeffrey Thomas. Be there for this exciting premiere event! Tickets start at only $30.

Subscribe to a package of five or more performances in the 2016-17 MasterCard Performance Series
by August 2, 2016 and be entered to win one of eight fabulous Wine Country Prize Packs.

"Postcards from The Grand Tour" - Opening Weekend Concert at ABS Festival
The 2016 American Bach Soloists Festival & Academy will feature music from Baroque Italy. The flourishing cities of Florence, Venice, and Rome—the primary destinations of the Grand Tour excursions taken by British nobility and wealthy landed gentry, and the meeting places for the most celebrated composers and performers of the era—offered some of the most glorious art, architecture, and music to be found anywhere during the Baroque era.

The second night of the Festival features a collection of captivating works by Italian composers including Albinoni, Caldara, Frescobaldi, Vivaldi, and others. Each piece, a souvenir from a stop along The Grand Tour of sun-drenched Baroque Italy, will be performed by the ABS Academy Faculty, an outstanding group of artists who are all world-wide leaders of the Early Music movement.

Study of New World Symphony WALLCAST Concerts Reveals Younger, Ethnically Diverse Audience
The WALLCAST Concert Experience, a yearlong independent study about the New World Symphony's WALLCAST concerts, is now available to the public. The study reveals that audiences for the format are far more diverse than audiences for traditional classical music concerts. This diversity is reflected across multiple indicators—primarily the age, ethnicity, and socioeconomic backgrounds of attendees.

WALLCAST concerts are free outdoor simulcasts of live concerts performed on stage inside the New World Center. Live video from the hall is projected onto the Center's 7,000-square-foot eastern façade and viewed from adjacent SoundScape Park, which was designed as an extension of the Center. Audio from the performance is transmitted through the Park's virtual-acoustic sound system by Meyer Sound of Berkeley, California. Noting that other orchestras and presenting organizations across the country are experimenting with similar formats, the study suggests that they may be interested in breaking down barriers related to "cost and negative perceptions of classical music as intimidating and inaccessible."

The study was commissioned by the Miami-based New World Symphony (NWS), America's Orchestral Academy, to assess the impact and role of its WALLCAST concerts in the community.  Funded in part by The Miami Foundation and led by consulting firm WolfBrown, the study investigates the WALLCAST format's effectiveness in attracting and engaging new audiences for classical music, reflecting not just NWS's commitment to audience development, but its mission to educate the next generation of musicians in these new approaches.

The findings of the report confirm the positive impact of the WALLCAST format in furthering NWS's broader effort to bring in new listeners, while also shedding light on the effectiveness of the simulcast format. "Digital programming has an important role to play in building demand, and WALLCAST raises the bar for digital concert experiences," says Alan Brown, who led the study. "For too many years, arts organizations have looked down upon digital programming because it's not live. The WALLCAST experience—which is live, but digital—is both impactful and deeply valued by audiences."

The program:
James Wintle's Pontoon-Bridge Miracle for clarinet, violin and piano, commissioned by Orion in 1996, is a highly programmatic and expertly crafted piece based on a poem about Chicago by American poet Nicholas Vachel Lindsay (1879-1931).

Mozart's Duo in B-flat Major for violin and viola, K. 424 was an act of friendship.

The Quartet in E-flat Major for violin, viola, cello and piano, K. 493 features some of Mozart's finest and most elegant writing for piano and strings.

Alexander von Zemlinsky's Trio in D Minor for clarinet, cello and piano, Op. 3 so impressed Brahms that he immediately brought it to the attention of his publisher.

Orion's 2016-17 season:
Orion's 2016-17 season, Miniatures and Masterworks, continues with "Serenade by Three: Orion Beginnings" in November, spotlighting Orion's original three members with works by Yadzinski, Granados, Khatchaturian, John Williams and Glick; "Connections" in March, welcoming back Stephen Boe for a program of Kritz, Mahler and Rebecca Clarke; and "Wit and Passion" in May, also featuring Boe for works by Jean Francaix and Brahms. Also during the season, Orion hosts a fall benefit November 19 at 12 noon at Dunham Woods Riding Club in Wayne, Illinois and appears on the broadcast series "Live from WFMT" October 3, 2016 and March 20, 2017 at 8 p.m.