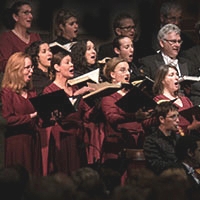 American Brass Quintet Returns to Aspen with Two World Premieres
Hailed by Newsweek as "the high priests of brass," the American Brass Quintet is internationally recognized as one of the premier chamber music ensembles of our time, celebrated for peerless leadership in the brass world. This summer, the Quintet returns as Ensemble-in-Residence of the Aspen Music Festival and School for their 46th consecutive year, and performs a recital at Harris Concert Hall on Wednesday, July 27 at 8:30PM. Their program spans several centuries and features two World Premieres written specifically for them: Kenneth Fuchs's Brass Quintet No. 2, "American" and Eric Nathan's Missing Words II.

According to Kenneth Fuchs, his ABQ-commissioned Brass Quintet No. 2, "American" is "cast in a single continuous movement of several variations on a theme." Fuchs was a student at The Juilliard School during the beginning of the American Brass Quintet's tenure as Ensemble-in-Residence, and is a faculty colleague of the Quintet's trumpetist Louis Hanzlik at the University of Connecticut. Clint Needham's Brass Quintet No. 1, "Circus," has made numerous appearances on the ABQ's concert programs, in addition to the ensemble's 2007 album Jewels. In Needham's words: "I drew inspiration for my brass quintet from not-so-fond memories of a circus I was forced to attend when I was younger."

The July 27th recital closes with a set of Venetian canzoni, during which the Quintet's students will join the ensemble onstage.

This Week at the Green Music Center: Gabriel "Fluffy" Iglesias, Boz Scaggs, & The Robert Cray Band
Electrifying comedian Gabriel Iglesias aka  "Fluffy" brings his personal experiences to life  with unique mix of storytelling, parodies and  characters to create a high-octane show for all  ages. Iglesias's hit DVD's Hot & Fluffy and I'm Not Fat…I'm Fluffy have sold over 1 million  copies, and has helped make him one of today's  most in-demand comedians.

With a plot drawn from real life – the 1963 divorce proceedings of the "Dirty Duchess," Margaret Campbell, Duchess of Argyll, this modern masterpiece provokes and challenges. Laura Bohn sings the role of the Duchess and Emma McNairy returns after her stunning performance as last season's Lulu, to sing the Maid. Tenor Jonathan Blalock and baritone Hadleigh Adams round out the cast. Elkhanah Pulitzer, who stunned audiences with last summer's Lulu, is the stage director. A collaboration with the San Francisco contemporary music ensemble EarPlay, Powder Her Face will be conducted by Mary Chun.

The releases come one year after the launch of the Munich Philharmonic's ground-breaking digital media production and distribution program. This media strategy has already produced films of numerous live performances in partnership with international broadcasters and online channels, significantly expanding global audiences for its concerts.

The Orchestra will release up to six new recordings per year, with a special focus on the rich German repertoire and composers with which it has been so closely associated since its foundation almost 125 years ago.

Global distribution of the MPHIL recordings will be managed by Warner Classics Label Services, across physical, download and streaming platforms.