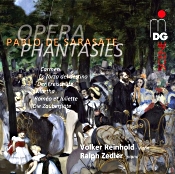 First, a word about the artists, about whom you may not know much. Since 1989 violinist Volker Reinhold has been the concertmaster of the Mecklenburg State Orchestra, which performs operas, operettas, musicals, ballet, and concerts at the Mecklenburg State Theater in Schwerin, Germany. According to his Web site, Mr. Reinhold "has gone on to perform a wide range of solo assignments and to dedicate himself intensively to chamber music. Additionally, for some years he has often assisted as a concertmaster with several Northern German orchestras. He has a special predilection for the virtuosic violin literature, above all Fritz Kreisler and also Pablo de Sarasate. He has incorporated practically all of the former's music into his repertoire. For many years he has performed successfully with his regular piano partner Ralph Zedler." Mr. Reinhold performs on a 'Mougeot,' a French violin from the nineteenth century."

In 1999 pianist Ralph Zedler graduated from Staatliche Hochschule für Musik in Cologne. He worked regularly in the singing classes of Liselotte Hammes, Klesie Kelly, Kurt Moll, Edda Moser. From the autumn of 1999 to January 2011 Mr. Zedler was engaged at the Mecklenburg State Theatre in Schwerin as soloist and Ballettrepetitor, participating in over seventy productions of opera, operetta, musical, oratorio, and ballet. Since 2011 he has worked at capital Opera, the smallest Opera Berlin devoting himself to the repertoire of forgotten one-act plays. Mr. Zedler's concert career has taken him along with prominent figures such as singers Agnes Giebel, Ulrich Hielscher, Jean van Ree, and Edda Moser.

On the present album, Reinhold and Zedler devote themselves to six of the opera fantasies of the Spanish composer and virtuoso violinist Pablo de Sarasate (1844-1908). As you know, Sarasate loved to dazzle his audiences, and what better way to do so than by playing some of his own transcriptions of already famous music. The program Reinhold and Zedler present here includes concert-fantasy arrangements for violin and piano of Carmen (Bizet), Die Zauberflote (Mozart), Der Freischutz (Weber), Martha (Flotow), La forza del destino (Verdi), and Romeo et Juliette (Gounod).

First up on the agenda is Sarasate's Concert Fantasy on Bizet's Carmen, as good a curtain raiser as any. Just don't expect a whiz-bang, gung-ho interpretation along the lines of a Ruggiero Ricci in his famous old Decca set. Reinhold and Zedler are more moderate than that; they don't try to generate a ton of excitement or dazzle the listener with their pyrotechnic skills. Their Carmen Fantasy sets the tone for the rest of the program by sounding traditional, well judged, thoughtful, and expressive. Now, this doesn't mean that the musicians don't have a good time with it. Indeed, it's all quite vital and pleasantly exhilarating. They simply don't go after the "wow" factor that must be so tempting in a work like this (although, to be fair, they end the piece in a flurry of emotional flair). 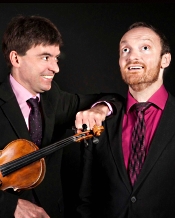 And so it goes, with Reinhold's violin carrying the day and Zedler's piano accompaniment always lending firm support. I can't say I liked some of the more-literal passages they take, yet they more than make up for it with the tasteful sensitivity of their playing. As this is mostly opera music, the players ensure that we hear the singers behind the notes, the violin and piano doubling for any number of voices from quiet solos to big choral numbers.

Of all the works on the disc, I think I enjoyed the Magic Flute Fantasy best of all. There's a delicacy as well as a zest about Mozart's music that Reinhold and Zedler capture brilliantly. Here, it also becomes clear that the two performers have been collaborating for years, their parts working beautifully, seamlessly, effortlessly together.

Another thing the players do well is make these fantasies work as a whole. Under the sympathetic guidance of Reinhold and Zedler these are not merely medley pastiches of starts and stops on familiar tunes. Instead, each fantasy sounds like a self-contained work with flawless transitions to help it appear all of a piece. Fascinating.

Producers Werner Dabringhaus and Reimund Grimm and recording and mixing engineer Holger Schlegel made the album in just about every audio format you can think of on a single disc: CD, SACD, DVD, 2.0, 5.1, and 2+2+2. OK, that last one got me, too. Unfamiliar with the format and with no information about it in the accompanying booklet, I had to look it up. Turns out that 2+2+2 utilizes all six channels on an SACD layer to present music not just in two channels front and two channels back but two channels up and down as well. So 2+2+2 captures all the reflected sound of a musical event in a true three dimensions. However, I have my SACD player hooked up only in two channels, so that's the way I listened: first in two-channel SACD and then for a few minutes in regular two-channel CD. In these modes, the sound was quite good. I can only imagine how much more interesting 2+2+2 might be.

Anyway, the two-channel stereo is very dynamic, with huge outbursts from the piano especially. It's never more or less than natural, and it makes a vivid impression on the listener. The engineers have picked up the room ambience nicely, with a mild and unobtrusive resonance lending a lifelike air to the proceedings. There is also a pleasing bloom on the instruments that further lends to the realism of the presentation.