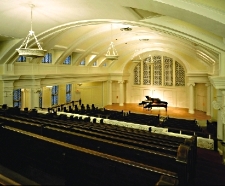 Celebrating 85 years, the Music Institute of Chicago announces the 2014–15 season of its popular Faculty and Guest Artist Series. All concerts take place at the historic Nichols Concert Hall, 1490 Chicago Avenue in the heart of downtown Evanston, Illinois.

Friday, November 7, 7:30 p.m.:
The festival opens with a rare performance of music from the legendary Bird with Strings recordings with jazz veteran Charles McPherson as saxophone soloist. Also on the program is a newly commissioned work by Jazz at Lincoln Center and Northwestern University mainstay Victor Goines, composed for jazz quartet and strings.

Community Music Festival, Sunday, April 19–Sunday, May 3, 2015:
Two weeks of concerts, master classes, collaborative score-readings and talks mix music lovers and musicians of all ages and levels with some of the greatest professionals. During the festival, Music Institute students perform 100 concerts in local communities at community centers, libraries, senior centers and other grassroots venues.

Ying Quartet:
Saturday, May 2, 7:30 p.m.
The Grammy Award-winning Ying Quartet has established itself as an ensemble of the highest musical order. Quartet-in-residence at the Eastman School of Music, this distinguished Music Institute alumni group performs classic repertoire along with works the quartet has commissioned

Allen Ginsberg's notes on Hydrogen Jukebox explain that "the title comes from a verse in the poem Howl: '...listening to the crack of doom on the hydrogen jukebox...' It signifies a state of hypertrophic high-tech, a psychological state in which people are at the limit of their sensory input with civilization's military jukebox, a loud industrial roar, or a music that begins to shake the bones and penetrate the nervous system as a hydrogen bomb may do someday, reminder of apocalypse.

"Ultimately, the motif of Hydrogen Jukebox, the underpinning, the secret message, secret activity, is to relieve human suffering by communicating some kind of enlightened awareness of various themes, topics, obsessions, neuroses, difficulties, problems, perplexities that we encounter as we end the millennium."

Drawing upon Ginsberg's poetry, this piece is a portrait of America that covers the 50s, 60s, 70s, and 80s, as seen by the collaborators Glass, Ginsberg and designer Jerome Sirlin. Its content ranges from highly personal poems of Ginsberg to his reflection on social issues: the anti-war movement, the sexual revolution, drugs, eastern philosophy, environmental awareness. The six vocal parts represent six archetypal American characters – a waitress, a policeman, a businessman, a cheerleader, a priest, and a mechanic.

"Hydrogen Jukebox is like a patchwork quilt," says stage director Elkhanah Pulitzer. "It uses Parataxis (the placing of clauses or phrases one after another without coordinating or subordinating connectives) to build connections in the eye of the beholder, to access the watcher's imagination. Even though it covers the 50s through the 80s, it is relevant today with our consumerism/materialism and struggles with war and the environment."

Both subscriptions and single tickets are now on sale at www.westedgeopera.org or by calling (510) 841-1903. Seating is general admission.

Based on the legends of Don Juan, the story spans the last twenty-four hours of Don Giovanni's life. With more than 2,000 romantic conquests, Don Giovanni lives life in the fast lane until a mysterious meeting with a statue begins his downward spiral. When he refuses to change his philandering ways, the unrepentant libertine is sentenced to hell by the ghost of the man he killed.

James Darrah, co-founder and director of a new Los Angeles production company, Studio Chromatic, was most recently director and production designer of San Francisco Symphony's production of Benjamin Britten's Peter Grimes. He has been described by the Chicago Tribune as "a gifted young American director delivering fresh and stimulating productions".

Conductor Martin Katz, dubbed "the gold standard of accompanists" by the New York Times is currently a Professor of Collaborative Piano at the University of Michigan. He has collaborated with the world's most celebrated singers in recital and recording, including Marilyn Horne, Frederica von Stade, Kathleen Battle, David Daniels, Karita Mattila and José Carreras. He previously conducted Michigan Opera's production of Die Zauberflöte and Merola Opera Program's productions of Il barbiere di Siviglia, La Cenerentola and L'elisir d'amore. He is the author of The Complete Collaborator, published by the Oxford University Press.

Listen! Radio Radiance Podcasts Now on Young People's Chorus of NYC Website and iTunes!
Young People's Chorus of New York City's premiere performances of the most recent Radio Radiance compositions are now available on the YPC website and on iTunes.  Visit the website now for not only the podcasts, complete with composer and chorister interviews, but also a step-by-step listening guide.

Hosted by WWFM's Marjorie Herman with interviews by WNYC's John Schaefer, hear how Tom Cabaniss creates "vocal fire" in "Celestial Fire" and how Susie Ibarra takes the listener back to stardust in "The City."  Can you recognize the word Kevin James inserts in the music to describe "Colors"?  And why did Toby Twining decide to write a musical composition about nuclear false alarm in WICBM?